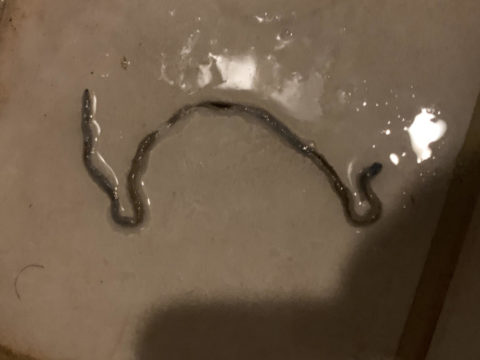 Long, Black and Brown Worms Found in Shower Could be Earthworms or Flatworms

“I have been finding 3-5 brown and black worms in my shower occasionally (every few days)”, states this reader about the long worm-like organism pictured below. “I live in Virginia Beach, Virginia in a home built in the 60s. Sometimes these worms are brown and black combinations, sometimes they are all black. Last week one was alive in the shower while I was showering and it appeared to be attached to the edge of the shower with its mouth like a leach, while its body waved around in the water. They appear to be worms, however. I usually find them dead in the shower before I start the water; apparently they come up out of the drain after I shower and leave the bathroom, and then dry out and die once the water has evaporated. They don’t appear to be earthworms, and they’re too large to be drain fly larvae. I’ve attached a couple pictures of one I found a couple days ago. I will check back to see if anyone can help identify these guys. Thanks!”