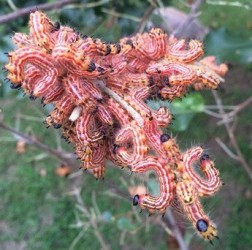 August 25, 2015
We received a question through the All About Worms Facebook page about red and orange caterpillars that a reader recently found on an apple tree. To call them "red and orange caterpillars" is at once insufficient and overreaching. It is insufficient because the creatures aren't only red and orange; they have black heads and legs, and some orange parts of their bodies might just as easily be described as yellow. White hairs also cover their bodies, and they are striped lengthwise, from head to tail. We overreach, however, in claiming without explanation that these creatures are caterpillars. The reader identifies them as worms, so we must explain why we think they are instead caterpillars. This explanation is of course tied to the matter of identification, which is what the reader is wondering about, and to that topic we now turn. END_OF_DOCUMENT_TOKEN_TO_BE_REPLACED
Comments: 0 Posted by: Worm Researcher Evan Categories: Caterpillars
Get tested for parasites at a fully-qualified lab near you, no doctor's visit required, through All About Worm's partnerships with HealthLabs and Life Extension Labs!