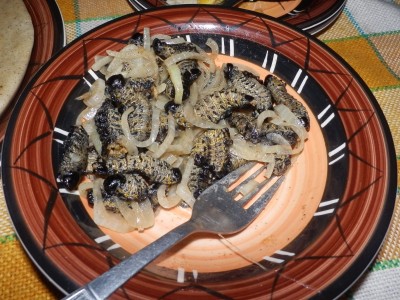 A reader from Newcastle, KwaZulu Natal, South Africa recently wrote to tell us that she had sighted African Emperor Moths and caterpillars near here home, and wonders if it is usual to find this type of moth so far inland.

A couple of years ago, we received a question about “long, thick, black, and spiky caterpillars with white dashes and an orange stripe.” This is more or less how the reader described the creature he found, which he called a “worm.” We were confident that our reader found a caterpillar and not a worm, but without a picture, we struggled to identify the specific species of caterpillar. Then, about a year after we wrote this article, another reader sent us a picture of a spiky caterpillar with an orange stripe that matched the above description. Both readers are from South Africa, so we were fairly sure that they were dealing with the same caterpillar, yet we still weren’t able to say exactly what species of caterpillar our reader found. At long last, however, we think we have arrived at an answer: the orange and black caterpillar with spikes is an African Emperor Caterpillar (Bunaea alcinoe), which is also called a Cabbage Tree Emperor Caterpillar.