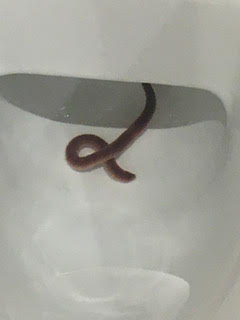 A long stripey, red worm was found in a toilet in Southern Scotland by this reader on the first floor of his home. He wonders if we can tell him what it is. 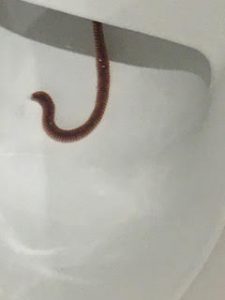 There is quite a variety of worms that tend to show up in people’s toilets, many of which are red, but it is the length and stripes that sets apart the red wiggler worm, which is what this worm is. Red wigglers, also known generally as red worms or tiger worms, get their name from their tendency to wiggle when handled. They are considered ‘manure worms’, which means that they feed on decomposing organic matter, much like earthworms, thus making them decomposers. In their natural habitat (nutrient-rich soil) they are environmentally beneficial as they help break down organic matter to then turn it into a nutrient-rich fertilizer through the excretion of faecal matter. For this reason, red wigglers are one of the most commercially sold worms for composting. Gardeners are big fans of these red critters.

Hence, red wigglers have been known to crawl up people’s toilets as they are attracted to whatever decomposing organic matter might lie there. This may be a sign of poor sanitation of the toilet, and thus the best way to ensure that no red wigglers, or other worms for that matter, show up is cleaning one’s toilet regularly. This is pretty much the rule of thumb for preventing any creature from crawling up one’s drains, and should applied to all the drains one has in one’s bathroom (sink and bathtub/shower). Naturally, this might also be a sign that some kind of organic matter has been building up in the pipes and is stuck there, thus attracting such creatures. In that case, we recommend contacting a plumber, as this is a problem usually beyond the capabilities of someone without the proper tools.

Our reader should not be worried about these worms in terms of his health or safety. Red wigglers are compost worms, and nothing more than that. They are not venomous, they do not bite and they are not known to carry pathogens or parasites, but it is not impossible that they might. We thus recommend removing the red wiggler immediately from one’s household and placing them in a forest or park where they may feed on organic matter in peace, and where they will be out of the reach of small children and pets, if that even applies to our reader.

In conclusion, the worm our reader found in his toilet in Scotland is a red wiggler worm. These harmless critters are decomposers of organic matter, and this worm was clearly attracted to this toilet for a reason. We advise following the methods listed above for cleansing the toilet and hope that this article has put our reader’s mind at rest.

Article Name
Stripey Red Worm in Toilet in Scotland is a Red Wiggler
Description
A long stripey, red worm was found in a toilet in Southern Scotland by this reader on the first floor of his home. He wonders if we can tell him what it is.
Author
Worm Researcher Anton
Share the knowledge