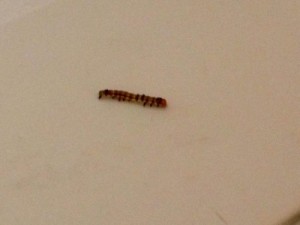 One of our readers sent us a picture of a worm-like creature that she found in her kitchen. She said that she found it on the lid of the trash can. She said the trash can was closed, so she assumed that it came from the kitchen counter or sink which are located relatively close to the trash can. She did mention that she has pets, so she wanted to make sure that they were safe from it. She first thought it to be a waxworm, but she said it was much longer, had stripes, and a red head. After looking at the picture, there is a possibility that it could be a couple of things.It could be a caterpillar and it could be a type of inchworm.

Our reader could be on the right track when assuming that this could be a type of caterpillar. From the picture, it looks like it has 3 thoracic sections behind its head and then it looks like it has some prolegs on the back of its body. Prolegs are small stubs that help caterpillars move around. Most larvae have prolegs which helps to make them caterpillars. Prolegs lack joints so therefore are not considered a type of leg, they are solely for locomotion. 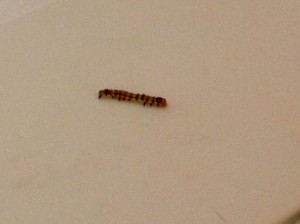 Another possible option for our reader’s creature could be that it is a type of inchworm because of the way the legs are distributed. Inchworms are a type of caterpillar that changes into a moth at their full grown, adult phase. They are usually green, brown, or grey. The creature that our reader found could possibly be an inchworm.

It seems as if our reader could have found a couple of things. Neither one of these can be harmful to her nor her animals so she can rest assured knowing that much.

Article Name
Striped Worm with Red Head in Kitchen
Description
One of our readers sent us a picture of a worm-like creature that she found in her kitchen.
Author
All About Worms
Comments: 0 Posted by: Previous Author Categories: Caterpillars, Inch Worms, Interesting Worms