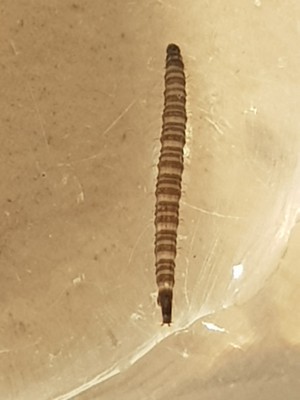 Striped Brown Worm in Toilet is a Drain Fly Larva

A beige-brown, striped worm was found by this reader, who wonders if we could tell her what it is. The worm was found in her toilet and she worries that it may be a parasite. 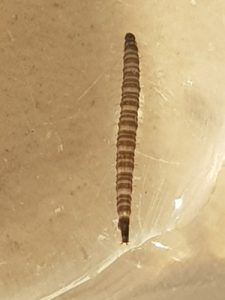 Firstly, we thank our reader for the excellent photographs she sent in; these are definitely some of the best we have received of this particular critter, which brings us to our second point. This creature is a drain fly larva. Drain flies are commonly found in bathrooms (and kitchens and basements too), because, as their name suggests, they crawl up through people’s drains. They do this when there has been a build-up of organic matter, which comes as a result of neglect of the bathroom (and can thus be found after a home has been left uninhabited for a long period of time) or lack of maintenance. Eggs are laid on the film that forms in the drain of a sink, shower or bathtub, and once hatched, the larvae will infest the drains, as well as crawl up through them in search of decomposing organic matter to feed on. Of course, as in the case of our reader, they have also been known to come up through the toilet, as that is where more organic matter tends to go down. Drain fly larvae are not parasites, and our reader has nothing to fear for her or anyone else’s health. The larvae are a characteristic brown or black in color, and are striped like the one seen in the photo. The adult fly is often mistaken for a moth, given its fuzzy, round body, and is even sometimes referred to as a drain moth. They are also often called sewage flies, filter flies or moth flies. 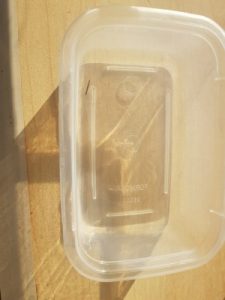 Now, it does not seem that our reader is dealing with an infestation just yet, given that she has only found one drain fly larva, so we will not treat it as such. All our reader needs to really do is deposit the larva outside and give her bathroom a thorough clean. Maybe run the taps for a bit too before and after pouring bleach down the drains to clean them. For those of our readers who think they might be dealing with an infestation of drain fly larvae, we can give some general advice on how to deal with such a situation. Basically, in order to control and eradicate a drain fly infestation, one has to do what we just advised our reader but on a bigger time frame. Consistent cleaning of the drains and entire bathroom, as well as running the taps frequently for a period of one-to-two weeks should do the job in eliminating and preventing drain fly infestations.

To conclude, the worm our reader found is a drain fly larva. While being completely harmless and not parasitic, the drain fly larva can still prove to be quite a nuisance if they breed and infest the given room. For that reason, we recommend that our reader gets on cleaning her bathroom immediately, and that she does it thoroughly. She may want to do that for a few days if she wants to be absolutely certain that she eliminates any build-ups of organic matter and destroys any films that might have formed. Best of luck to her!

Article Name
Striped Brown Worm in Toilet is a Drain Fly Larva
Description
A beige-brown, striped worm was found by this reader, who wonders if we could tell her what it is. The worm was found in her toilet and she worries that it may be a parasite.
Author
Worm Researcher Anton
Comments: 0 Posted by: All About Worms Categories: Drain Fly Larvae, Pest Worms, Worms Found in the House