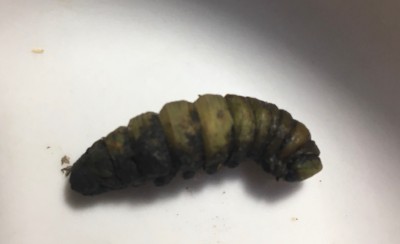 “When I first saw it, I thought it was a small, skinny pinecone,” says this reader in Saskatchewan, Canada about the “weird caterpillar/grub” she found near her garden. The grub in question is a dark green color and has a body with clear segmentation. 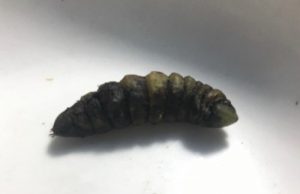 To start off with, we want to note that this is an excellent submission. Our reader has not only provided us with excellent photographs of this creature, which we have embedded throughout the article, but she has given us heaps of rich context which makes it easier for us to identify the caterpillar, and which also gives more substance to the articles that we write here at All About Worms. So for this we thank our reader.

Now, to get into our reader’s story. Although our reader states that she has no idea what the creature is, she brainstorms quite a bit about the nature of the creature and why it has appeared in her garden, and we appreciate her for this. To start off with, the creature was found near her garden, next to a compost pile under a tree. “For all I know, it might have fallen from the tree.” She adds that perhaps the caterpillar was after the compost, or perhaps it lives in the soil, which is rich in sheep manure. Additionally, our reader ponders if she “will end up with a pretty butterfly or moth”, “a big gross beetle”, or “something else entirely”. Our reader feels that she needs to know, because at the point of submitting her query, she had been seeing “this thing for days straight” and thinks it is “taunting” her. She only realized the caterpillar was not a “skinny pinecone” and actually “one of the biggest bugs [she had] ever seen” upon picking it up. “It nearly gave me a heart attack when it moved,” our reader reports. According to our reader, the photo above “shows its stomach and the front of its head.” One can make out its “stubby” legs, though we think these are far more visible in the photograph below. Our reader apologizes for not cleaning off the caterpillar more, which tells us that what looks like black patches of coloration is actually just soil. 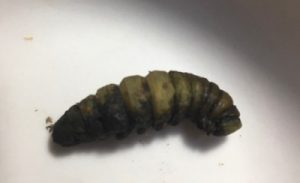 “The head is interesting to me, mostly because I don’t really see a mouth,” says our reader. Well, if this is a caterpillar, then it is possible that it is hiding its head, as this is an ability a lot of caterpillar species possess and utilize when they feel threatened. Our reader notes that the creature moves at an incredibly slow pace, “so slowly that snails look fast.” She says it has been sitting in the same spot for three days in a row, and that it only barely moved from its current spot. That said, the caterpillar “jerks away” at her touch, which is how she knows it is still alive. She further states that she has to be rather gentle when holding the caterpillar, as it is really squishy. For that reason, as well as because it has legs and moves, she does not think this is a pupa. “The only other thing I could find was a cutworm caterpillar, but as you can see… this isn’t a cut worm.” We will come back to that statement later on. Other than cutworms, our reader has not been able to find any other “caterpillar-like things that live in dirt” and definitely not anything that moves this slowly.

The caterpillar does not eat, from what our reader has seen, and she says she would not blame us for thinking the critter was dead. She emphasizes how little it moves, and she has grown concerned for the little guy. Interestingly enough though, our reader’s descriptions of the caterpillar’s movements changes drastically from the beginning to the end of her query. As we know, she first emphasizes how “stiff” its movements are, barely moving at all. Then, she reports that it will move “to stand itself up on its stubby legs.” Later on, she says: “even as I’m writing this, it rolled over to stand up in the bowl, only to fall back over again” and that from time to time, it will bob its head. Finally, by the very end of her submission, the caterpillar is “doing some weird movement where it pushes out the back two segments. […] It’s actually become very active.” She questions whether or not the caterpillar has become active as a result of her shining a light on it, and wonders if the caterpillar is sensitive to the light. “I wonder if it’s sick?” she adds. Similarly, our reader is also concerned about what looks to be a “little orange worm” crawling on the caterpillar’s body (see image below), and she has no idea what it might be and if it is harming its host. Our reader concludes her submission by thanking us for our hard work, and stating that our “articles are interesting (if a little horrifying at times), and [she] can appreciate some brain food.” We thank her for this, and apologize for any harrowing articles on our part.

Now, that is quite a bit of context. And for all the exquisite detail that our reader provides us, we will give a brief and simple answer to the question of the caterpillar’s identity, so as not to bore our readers with a Bible-length article. We wonder why our reader made the assertion that this definitely was not a cutworm, because we think that is definitely what it is. Cutworms are a subcategory of moth caterpillars that do indeed live underground in the soil, where they feed on the lower parts of plants. In particular, cutworms are known for the efficiency with which they chew through the stems of plants and thus ‘cut’ them down, hence giving them their name. What species this cutworm is exactly, we do not know. As our reader seems to only be dealing with the one cutworm, we would say that her garden if probably not infested, which is a good thing. 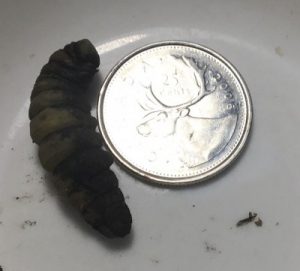 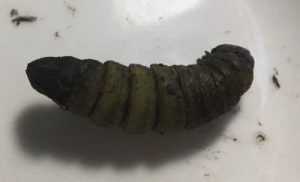 To keep her garden from becoming infested and controlling cutworm populations, she should make sure she consistently cultivates her soil and weeds it, as this will eliminate breeding sites for cutworms. As for the orange worm on the cutworm and the creature’s sluggish movement, it could very well be that the cutworm is “sick” and that the worm is causing it, but it is difficult for us to say. The orange worm is so tiny and featureless that one can barely make out its physical characteristics, and it does not resemble any caterpillar parasites that we know of. Besides that, it is possible the cutworm has been injured, or perhaps it is about to enter pupation and that it why it is moving so slowly; it is hard to say.

To conclude, the caterpillar our reader found near her garden is indeed a cutworm. Although we do not know the exact species, the protocols for controlling their populations remain the same. We recommend that our reader move the cutworm to another habitable place, as it can cause damage to her plants. If our reader should find any more of these and wants more tips on how to manage and eliminate cutworm infestations, she is welcome to contact us again or drop a comment below. Otherwise, we hope that this article was able to quell some of her concerns and that this cutworm will no longer taunt her.

Article Name
Strange, Green Caterpillar Found Near Garden is a Cutworm
Description
"When I first saw it, I thought it was a small, skinny pinecone," says this reader in Saskatchewan, Canada about the "weird caterpillar/grub" she found near her garden. The grub in question is a dark green color and has a body with clear segmentation.
Author
Worm Researcher Anton
Share the knowledge

People helped by this info: 875