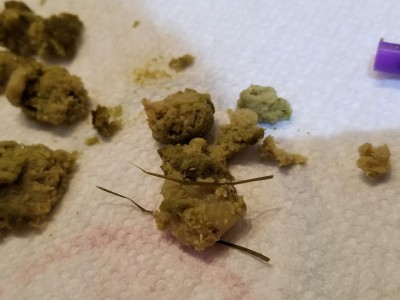 Stick insects were believed to have been found in the vomit of this reader’s dog in Omaha, Nebraska. We wish to warn our reader ahead of time that the images may upset some people’s stomach, which showcase strands of what looks like grass poking out of chunks of dog vomit. 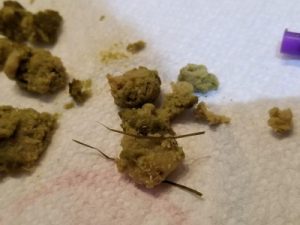 Our reader states that after having read one of our older articles Worm That Disguises as Blade of Grass, she wonders if we have any more information on the creatures that article dealt with, namely phasmatodea, otherwise known as stick insects. She thinks that she found stick insects in her dog’s vomit, or something “at least similar.” She states that they are “quite aggressive” and hopes that we can give her an idea as to what these creatures are.

There are, in fact, hundreds of species of phasmatodea, so pinpointing one specific species would be quite difficult, but if these creatures do resemble blades of grass, then they probably are stick insects. The various species of stick insects can resemble things from a forest such as grass, sticks, and leaves. This camouflage acts as a defense mechanism against predators, and proves to be quite successful, unless of course, as in the case of our reader’s dog, the predator is just eating grass and leaves. Regardless, most stick insects are not harmful to digest, and are not parasitic, so our reader needs not worry about her dog. That being said, some stick insects can be poisonous upon consumption, and although these are not common, our reader should take caution. Perhaps it is worth considering taking her dog to the vet just to check. 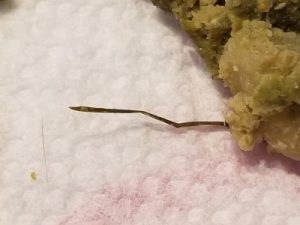 In regards to our reader mentioning that the stick insects are “aggressive”, we are not sure to what extent she was implying, as she did not elaborate on that point. From the image, the stick insects appear to be quite thin and frail, which would also be true for those emulating blades of grass, and thus we doubt that their hostility might be of danger to our reader or their dog. Additionally, our reader might want to entertain the notion that, at least in the case of this photo, these simply are blades of grass. It is difficult to tell from the photo of these strands (which we assume would have been the body of the insect) whether these are parts of an insect, or are just blades of grass. Of course, as our reader claims the insects are aggressive, we are assuming that she has seen them alive as well, prior to being eaten by her dog. 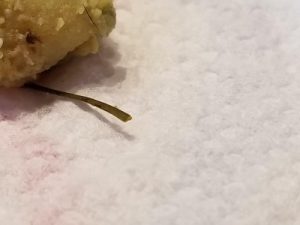 To conclude, it seems our reader’s dog has been consuming stick insects, otherwise known as phasmatodea. In normal cases, there would be nothing to fear if one’s pet ate stick insects, but one can never be sure, so if our reader wishes to, she may take her dog to the vet. Better safe than sorry!

Article Name
Stick Insects Discovered in Dog Vomit
Description
Stick insects were believed to have been found in the vomit of this reader's dog in Omaha, Nebraska. We wish to warn our reader ahead of time that the images may upset some people's stomach, which showcase strands of what looks like grass poking out of chunks of dog vomit.
Author
Worm Researcher Anton
Comments: 0 Posted by: All About Worms Categories: Garden Worms, Interesting Bugs, Popular "Worm" Groups