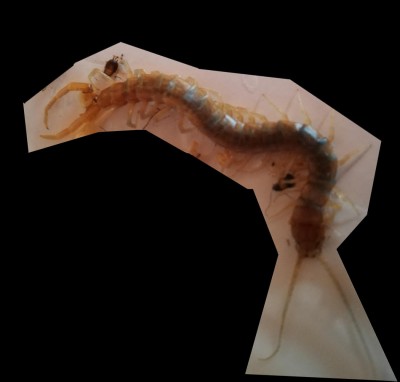 “Some type of worm” was found by this reader in her house, and she asks that we tell her what it is. Our reader has never seen a “worm” like this before, which appears to have a long body, with “15 or 16 sets of legs” (though we count 20) sprouting from its sides, a yellowish coloration, antennae on its head, and a set of “hard” pincers at its rear. 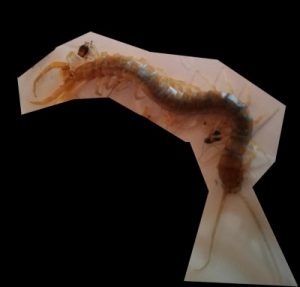 What our reader found was no worm at all, but in fact a centipede. By the looks of it, it is no ordinary house centipede either. As there is no size comparison, we cannot tell exactly how big this centipede is, but it does not look like any small critter, and we advise that our reader is cautious if and when he handles it. This is because centipedes, by nature, possess venom that they can administer through their pincers or their bite. Although most centipede species (although not the giant ones) will not possess enough venom to seriously harm or kill a full grown human being, bites can nonetheless still be extremely painful, and the danger to young children and babies is far greater given that their bodies are smaller.

Despite this, centipedes are generally not to be feared as they will not attack unprovoked. Although the venom can be used for self-defense, it is generally used for hunting. Centipedes are predatory creatures and carnivores, unlike some of their arthropodic brethren such as the millipede, but like the spider and scorpion. They tend to hunt mites, moths, cockroaches and other insects that can be found around the house, and some people consider them a beneficial presence in the home. Of course, this usually applies to the much smaller house centipede, which is shorter and smaller, the legs taking up more space than its body. Plus, the bigger the centipede, the bigger the prey. Some species of giant centipede — which are truly frightening to behold — have been known to hunt mice!

Infestations of centipedes can occur, but are not very common, so we doubt this is something our reader needs to worry about. Our reader can, of course, check if she feels the need to, and in that case we recommend checking in any dark and damp spaces in her house, as this is the type of environment centipedes prefer. Otherwise, we simply recommend moving this centipede outside and calling it a day. Like we said before, one should be cautious when handling a centipede. In addition to their bite, they can also be very fast due to the sheer number of legs they possess. We recommend that our reader wear gardening gloves (or some kind of protective gear) and that she tries to trap the centipede in a box (or in something from which the centipede cannot escape) before releasing it outside. She may want to take it to a nearby forest, or somewhere further away from her house so it does not just try to get back in. Further to this, our reader should ensure that there are no cracks in her walling and flooring, and that her window screens are in good condition to prevent any such critters from finding their way into her home again (although this centipede could have also wandered in through an open door – there is a lot of that during summertime; it cannot be helped!)

To conclude, the “worm” our reader found in her house is actually a centipede. Though centipedes are not life-threatening, they are not completely harmless either. We commend our reader for not freaking out upon discovering the centipede, and we hope that the process of removing it from her house goes smoothly!

Article Name
"Some Type of Worm" with 20 Sets of Legs Turns Out to be a Centipede
Description
"Some type of worm" was found by this reader in her house, and she asks that we tell her what it is. Our reader has never seen a "worm" like this before, which appears to have a long body, with "15 or 16 sets of legs" (though we count 20) sprouting from its sides, a yellowish coloration, antennae on its head, and a set of "hard" pincers at its rear.
Author
Worm Researcher Anton
Share the knowledge

This many people searched for this info: 800