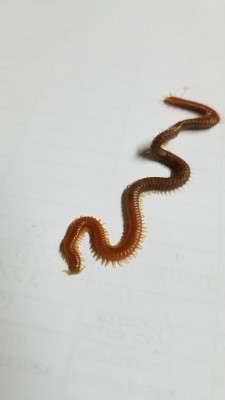 Soft-Bodied Worm-like Creature in Kosovo is a Centipede

What is described as a “soft-bodied worm-like creature” has recently been found by one of our readers based in Kosovo. He hopes that we can help identify this creature, which appears to have a long, but thin body, dozens of legs sprouting from the sides of its body, two antennae on its head, and a red-to-brown gradient along its body. 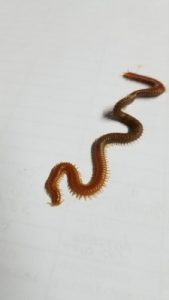 Firstly, before we get into identifying the creature, we wish to thank our reader for providing such excellent quality photographs. Not only are we able to discern all of the critter’s minute details, which helps us identify the creature much more quickly, but a second photograph (shown below) sees the critter next to a pen for size comparison, which helps us even more! And the photographs will make an excellent addition to our library. Secondly, our reader did mention that after handling the critter, his fingers smelt “somewhat vinegary.” 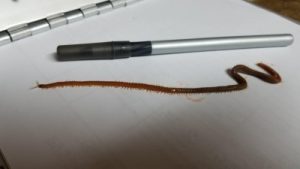 We believe the creature our reader found to be a centipede. These critters are extremely common all over the world, and are relatively harmless to humans when found in this size. In fact, several people purposefully keep house centipedes (a specific species of centipede which are shorter but with longer leg) around when they find them in their homes, and we have previously written an article that posed the question of whether or not we should let centipedes live in our homes. This is because centipedes actually eat a lot of the other pests we find in our homes, like termites, moths and flies, without leaving behind any webbing or nests like spiders do. That being said, centipedes generally get a bad rep because of the facts known about this class of arthropods as a whole.

Centipedes are venomous predators which can vary from small, thin critters like the one our reader found, to giant jungle-dwelling beasts that are several feet long. When they are as tiny as the centipede our reader found, they can give off a bite that could sting, but is unlikely to have a long-term effect, and is extremely unlikely to be life-threatening. This is because the ratio of a tiny centipede’s venom to the volume of a human’s body is so imbalanced that it will have little to no effect on a human being. In a setting where a centipede is preying on a moth or a termite, then yes the venom will be fatal, as the prey is much smaller. Of course, the bigger the centipede, the more dangerous they are, for this reason. The giant centipede species of the Amazons and North Americas are rightly feared, as they can be dangerous. With all of this in mind, we still advise that our reader is careful when handling the centipede, as a sting is still not pleasant, even if it will not land you in the hospital; wearing some kind of protective gear, like gardening gloves, would be a good idea.

There are some unknowns here though. In terms of the specific species of centipede this is, we are unsure. It is likely a soil centipede, which can be found in gardens, and somewhat resembles the Cryptops parisi or Cryptops anomalans, though we are not sure. Furthermore, with regard to the vinegar smell that the centipede gave off, this could either be some kind of protective fluid the centipede secretes through its skin to discourage predators from eating them, or could simply have to do with whatever the centipede had been walking through that day. Since we do not know its specific species, we cannot say for sure the purpose or origin of the vinegar smell. The centipede’s cousin, the millipede, has been known to possess glands that secrete a foul-smelling substance to ward off predators, but the creature our reader sound is clearly a centipede, given that the legs are sprouting from its sides, and not from underneath its body. If any of our readers wish to know the key differences between centipedes and millipedes (as the two are often confused), we have also written an article on this topic.

In conclusion, the critter our reader found is a centipede. Given its minuscule size, it should be rather harmless, but we still advise caution if and when handling it, as we would for any worm-like creature found. If any of our readers happen to be experts on identifying centipede species and have an idea as to the specific identity of this centipede, they are welcome to comment their ideas below! Otherwise, we hope that our reader who submitted these photographs can rest assured that the creature they found is but a centipede, and that it has likely taken care of some other pests that may have been wandering around the same location.

Article Name
Soft-Bodied Worm-like Creature in Kosovo is a Centipede
Description
What is described as a "soft-bodied worm-like creature" has recently been found by one of our readers based in Kosovo. He hopes that we can help identify this creature, which appears to have a long, but thin body, dozens of legs sprouting from the sides of its body, two antennae on its head, and a red-to-brown gradient along its body.
Author
Worm Researcher Anton
Comments: 0 Posted by: All About Worms Categories: Centipedes and Millipedes, Garden Worms, Worms Generally