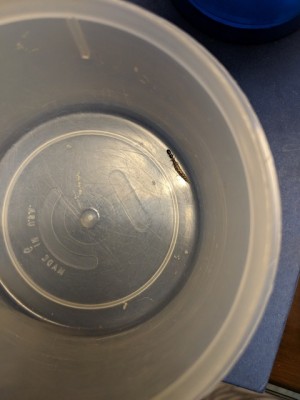 One of our readers recently sent us a picture accompanied by the question, “What is this?” She explained that she found it crawling on her comforter, and has never seen one before. The creature has a segmented body with brown and white posterior segments, and black anterior segments. We suspect it also has legs, but we can’t see them in the photo: 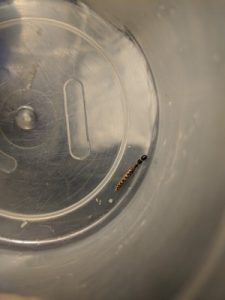 We are confident that this is a snakefly larva. There are roughly 300 known snakefly species, and over 25 of these species are found in the United States, living between the Rocky Mountains and the Pacific Ocean. There are also snakeflies present in Europe, central Asia, and other parts of North America.

Snakeflies aren’t often discovered in homes, and they aren’t considered to be household pests. They usually live in forest ground litter or under the barks of trees. Snakeflies eat small grubs (beetle larvae), aphids, and young caterpillars (moth and butterfly larvae). We can’t say with certainty why this larva was wandering across our reader’s comforter. Maybe it crawled in through an open window, or maybe it came from somewhere else in the house. There are some theories that tie snakefly larvae presence in a home to bringing in firewood from the outdoors. So if our reader keeps firewood in her home, it may be the source of this larva.

Luckily, these larvae aren’t dangerous or harmful towards humans or pets, and they don’t have destructive eating or breeding habits that could destroy our reader’s home. If our reader wants to ensure no more snakefly larvae end up in her house, she can take extra efforts to clear away leaf litter from the perimeter of her house, seal up small gaps and cracks in the foundation, and make sure all of her doors and windows are properly sealed. These steps will help deter snakefly larvae and other small organisms from crawling in!

In summary, the brown and black organism our reader noticed on her comforter is a snakefly larva! Since these aren’t household pests, our reader doesn’t need to worry about a potential infestation. However, we did touch on a few ways she can prevent other larvae from sneaking in.

Article Name
Snakefly Larva Found on Reader's Comforter
Description
The brown and black organism our reader noticed on her comforter is a snakefly larva! Since these aren't household pests, our reader doesn't need to worry about a potential infestation. However, we did touch on a few ways she can prevent other larvae from sneaking in.
Author
Dori Franklin
Comments: 0 Posted by: Worm Researcher Dori Categories: Garden Worms, Worms Found in the House