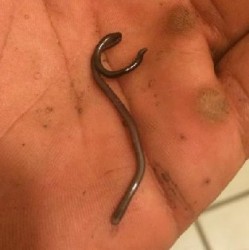 Recently a reader sent us a picture of a smooth, gray worm that he is holding in the palm of his hand. Presumably, the reader found the worm and is wondering what it is, but this is conjecture since we were sent the picture with no accompanying text (apart from “sent from my iPhone.”) We therefore don’t know where, or in what circumstances, this worm was found, and obviously this makes identification more difficult, but the picture is good, so we’ll do what we can with that.

It is kind of hard to see, but the image seems to have been captured inside. However, the reader’s hand has dirt on it, perhaps indicating that he was outside doing yard work, where one is more likely to come across a worm – or at least certain types of worms, and that’s one reason why it would be helpful to know where this worm came from. Was it beneath the soil of one’s yard or garden, or was it found in some corner of the house? This is obviously relevant.

About the only thing we can say with confidence is that this does seem to be an actual worm, as opposed to some sort of insect larva, which is what we end up writing about most of the time. It is difficult to single out which of the thousands of different types of worms our reader found, but we can limit the number of possibilities.

First, this doesn’t seem to be a clitellate because the creature above appears to lack a clitellum – the bump around the middle of some annelid bodies. If it has no clitellum, then it can’t be one of the species of earthworm or another type of clitellate. If it is nevertheless an annelid worm, though, it would be a relatively rare terrestrial species that is not also a clitellate. It is hard to definitively establish that the creature pictured above has no clitellum – its body is folded over, and the clitellum isn’t clearly visible on immature clitellates – but it doesn’t seem to have one. The only other thing we can say is that the mere fact (if it even is a fact) that it was found on land limits the range of possibilities substantially. For example, if it isn’t an annelid, it could be a worm in the phylum Platyhelminthes, which is composed by the “flatworms.” Out of 15,000 species, less than a thousand are terrestrial. Even though they make up a small part of the genus, people still find them – hammerhead worms come up from time to time – so this is a possibility as well.

Obviously, we have only limited the range of possibilities, not offered a positive ID, but this is all we can offer in the present circumstances. Our reader can look into the broad taxonomic groups we have identified, and he can perhaps further narrow the possible identifications by searching based on where he lives and where exactly he found the worm.

Article Name
Smooth, Gray Worms
Description
Recently a reader sent us a picture of a smooth, gray worm that he is holding in the palm of his hand.
Author
All About Worms
Comments: 0 Posted by: Worm Researcher Evan Categories: Worms Generally