A little while back, we received a question from a reader about small worms (or larvae) he found in his shower. Actually, the word “small” doesn’t adequately capture the size of the worm (or, again, larva) our reader found because they are said to be .01 of an inch in size, which is about the size of a speck of dust. With all due respect to our reader, we think a measurement miscalculation was probably made because .01 of an inch seems impossibly small for any sort of worm or larva, and this is true regardless of whether he was referring to the length or width of the creature he found. In assuming that a mistake was made, however, we must guess at the size of the worm, further complicating our idea of the creature with which our reader is dealing.

In any case, we know that the worm (if it is a worm) is small. What else do we know about the possible worm? Helpfully, the reader sent us a couple of pictures. Here is the clearer of the two: 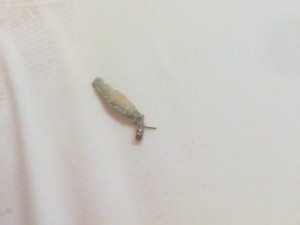 As you can see, the “worm” is a brownish white color, and, crucially, it appears to be emerging from some type of cocoon. What you can’t see is that the creature has what appear to be small legs attached to its body, according to the reader’s description. The reader found about six of these creatures, but only the one pictured is in a cocoon-like structure. What did our reader find?

As always, we can’t be totally sure, but two possibilities come to mind based on the reader’s description and pictures of the creature. Where he found them (the shower) is also relevant. Neither possible creature is a worm.

The first possibility is that our reader found moth fly larvae, which are extremely common and are routinely found by our readers (and as a consequence we have written about the larvae of moth flies before – multiple times, in fact). Also called “drain flies,” “sewer flies,” and “filter flies,” moth flies are often a grayish color, but the larva can be of a faint brown hue, just like the creature pictured above. Moth flies and their larval form are found in houses around places that come into contact with water (that is, moist places), like pipes and drains (and showers, where the reader found the creatures under consideration), which explains the moth fly’s alternate names. Like the larvae of other moths, moth fly larvae make cocoons as part of their life cycle. It is during this stage that the larvae (which were once eggs) mature into their adult form. Perhaps this process explains why the creature has (or appeared to have) legs. While the larvae of moth flies are small, they are definitely not .01 of an inch in size. Rather, they are about a quarter of an inch long. Clearly, moth fly larvae and the creatures our reader found share a lot of characteristics.

It is also possible that our reader found maggots, the larval form of a common housefly. Maggots are generally white or a whitish color, although their heads are black. Again, this seems to fairly well match the creature pictured above. Maggots, being about half an inch long, tend to be slightly larger than moth fly larvae, and obviously they are considerably larger than the reader’s approximation of the size of the creatures he found. Maggots tend to be found in unsanitary places, so a shower that hasn’t been cleaned in a while (not that this is necessarily the case with our reader’s shower, of course) might serve as an attractive home for maggots. Maggots also undergo a period in a cocoon, a stage that lasts about three to seven days, before maturing into adult flies.

These are our two best guesses for what our reader found, but, as always, we could be mistaken. However, we recommend our reader look into moth fly larva and maggots (neither of which are worms), as they are both reasonably informed hypotheses.

2 thoughts on “Small Worms in the Shower”