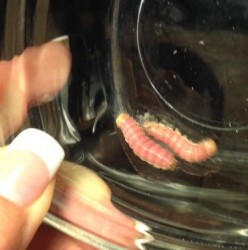 Small Worm with Red Bodies and Tan Heads in the Kitchen

A reader wrote to us recently to ask about two worms she found in her kitchen. The worms have red bodies and tan heads, and they are perhaps a half an inch (one centimeter) long. The reader isn’t particularly concerned with what they are, and is instead focused on the question of where they came from. She has no indoor houseplants, and her windows and doors have been closed. She also says she has no food, but it is hard to take this literally, so perhaps she just doesn’t have food that is laying around the kitchen. As the reader points out, though, these two worms must of come from somewhere, and where might that be?

We’ll start with the picture the reader submitted along with her question. We included the reader’s (very well-manicured) nail to give you a sense of scale:

No matter what this creature specifically is, we are very confident it is some type of larva, not a worm, even though many larva have common names that include the word “worm.” For example, two common pests found in kitchens (or more precisely pantries) are mealworms, the larval form of Tenebrio molitor (a species of darkling beetle), and waxworms, the larval form of Indianmeal moths, which are often just called “pantry moths.” These two types of creatures are indicative of the types of larvae people find in their kitchen, which are almost always the immature form of beetles and moths. We mention these two creatures not only because they are commonly called worms, but also because it is possible our reader found a mealworm, whose body is generally a brown or tannish color, but it can also be vaguely red. Still, a mealworm isn’t a perfect fit with the creature above, but it’s a possibility. What our reader found also looks like a so-called butterworm, the larval form of the Chilean Moth (Chilecomadia moorei), but this is very unlikely unless our reader lives in Chile. So, we don’t have a confident identification to put forward, and we haven’t considered the topic as deeply as we might otherwise because the reader isn’t interested in what she found, but how they entered her home.

The range of possibilities is fairly broad, and the reader mentioned a few, even though she was only dismissing them as possibilities. She is right to limit the number of possible explanations, but we aren’t sure if she can totally rule out things like the larvae entering through an opening in the house. The doors and windows are presumably opened on occasion, and it’s not like houses are perfectly sealed anyway. You can certainly limit the number of insects in your house by keeping doors and windows closed, but they still manage to come in. Also, we aren’t sure if food played no role in the creature’s presence in the house. A large number of pests that people find in the kitchen specifically target pantries, where foods like grains, cereal, crackers, rice, pasta, cheese, chocolate, and dried fruit are found, and in fact the main way that these creatures enter the house is through an infested package. In other words, the pest will already be in something like a big bag of rice, and then the creatures can spread around the pantry from there. Again, the reader said she had no food, but if she only meant this in a limited way (like there are no open containers or dirty plates on the counter), then we think it might be a factor in what she found. Finally, it is worth noting that an insect might fly into the kitchen and lay eggs, which in turn will grow into larvae. We mention this because sometimes people don’t see the connection between something like a moth flying around and a larva crawling on the ground.

Of course, what we write is necessarily speculative – only so much can be inferred from a short message and a picture. However, we are basically certain she found some type of larva, which may have entered the house under their own volition, as it were, or they may have been introduced though something infested, like a food package (if such packages exist in our reader’s house). Finding a couple of larvae isn’t necessarily cause for concern, but it is worth looking around the kitchen to search for more, and special attention should be paid to the pantry (again, if there is one). We have written an article about getting rid of mealworms, and even though we don’t know what our reader found, some of the advice in this article could be helpful.

Article Name
Small Worm with Red Bodies and Tan Heads in the Kitchen
Description
A reader wrote to us recently to ask about two worms she found in her kitchen.
Author
All About Worms
Comments: 0 Posted by: Worm Researcher Evan Categories: Pest Worms