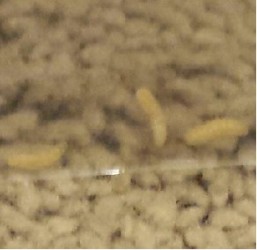 Small White Worms in the Bathroom

First, here is the picture she sent along with her email:

It’s a little hard to make sense of what we are looking at, but it appears that the worms are under some piece of glass or plastic that is in the bathroom. Because this glass or plastic is over carpet, we think this might be at the base of the toilet; the hard surface makes it easier to clean around the toilet, a place in the house that calls aloud for frequent sanitation if there ever was one. However, a hard surface like this can only do so much good, and we suspect that carpet around the base of the toilet is among the most unhygienic innovations of modern humans, even if it is covered. Indeed, covered carpet around the base of the toilet might be even worse because if anything gets below it, it may not get cleaned for a long time.

We dwell on this for so long because the carpet in the bathroom is almost certainly connected to the worms she found, which we don’t think are worms, but rather larvae. In particular, we think they might be maggots, the white and worm-like larval form of flies. (“Maggot” generally only refers to the larvae of Brachyceran flies, such as houseflies, but technically a maggot can be the larval form of any fly.) Carpet under a toilet is almost necessarily unsanitary, and thus a perfect place for maggots, who feed on decaying organic matter and waste. In our article about worms and maggots in the bathroom, we specifically singled out bathroom floors as a place that might attract maggots, and thus the carpeted area underneath a toilet is a fortiori a place that might attract maggots. Of course, we don’t know for sure if the reader has a carpeted bathroom, and we also don’t know if there is carpet under the toilet, but a bathroom is still a relatively common place to find maggots.

The best way to get rid of maggots is by removing the current generation, the maggots and the adult flies, and by eliminating the conditions that gave rise to the larvae population in the first place. Above all else, this means cleaning thoroughly and frequently in an attempt to remove any potential food source, and this might be difficult with carpet, but not impossible. If there is no attractive place for flies to lay their eggs, a new population will not spawn, and this is the goal of any pest removal. This advice applies to essentially any larvae or worm she might have found.

We aren’t certain our reader found maggots, but there are a couple good reasons for thinking so. First, the creatures look like maggots, and second, they were found in a place that might naturally attract maggots. Hopefully our reader is able to take care of the problem without too much trouble. We wish her the best of luck.

Article Name
Small White Worms in the Bathroom
Description
A reader wrote to us with a question about a few small white worms she found in her bathroom.
Author
All About Worms
Comments: 1 Posted by: Worm Researcher Evan Categories: Gross Worms