A reader wrote to us a while ago about some small white larvae with black heads (or what many will inevitably, but incorrectly, refer to as small white worms with black heads) that he has been finding. He never actually referred to the small white creatures as “larvae,” but his excellent photos (included below) fairly clearly show larvae. Identifying worms, larvae, and other such creatures is rarely a certain enterprise, but at this point in our august career, we’re confident in our ability to spot a larva when we see one. We’ve written about larvae before – indeed, we’ve written about small white larvae with black heads before – and we’ll write about them again. But we’re getting ahead of ourselves: what kind of small, white, black-headed larvae did our reader find, and how should he get rid of them?

It’s rare for us to include three photos in a post, but the reader sent some excellent shots, and each one of them further illustrates our reader’s situation, so we’ve included them all.

Here is the first, most zoomed-out shot: 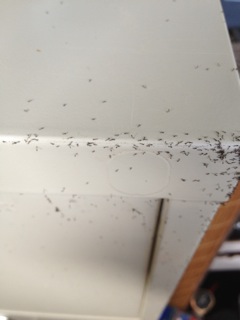 Here is a slightly closer image of the creatures: 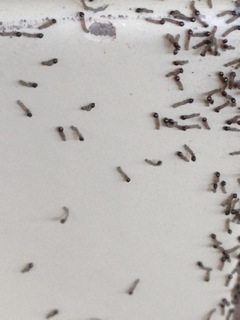 And here is the closest photo, which features some item we can’t exactly make out: 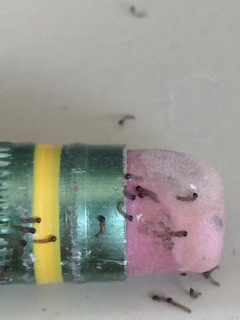 So, what are these creatures? We sound like we’re repeating ourselves (because we are repeating ourselves), but it is reasonably likely that our reader is dealing with fall armyworm larvae, an extremely common larvae infestation that has afflicted many of our readers over the years. It is also possible that our reader found Indianmeal Moth larvae, which are commonly called “pantry moths,” a hypothesis we base primarily on the creatures’ appearance, with their light bodies and dark heads. In any case, the solution to the problem will be in principle the same, so we’ll move on to the matter of getting rid of the larvae.

To perpetuate their life cycle, larvae of course need a food source, so if their food source can be eliminated, the adult form of the creatures (flies or moths, in the present case) will cease laying eggs in the affected area. How do you remove a food source? In the case of larvae, the answer is to clean. If they are surviving on, say, a box of cereal, that cereal obviously needs to be removed. The area around the (hypothetical) cereal box also needs to be cleaned, and other sources of potential food need to be tightly sealed.

We aren’t positive our reader found fall armyworm larvae or pantry moth larvae, as, for one thing, the term ‘fall armyworm’ applies to a number of species, but these are two likely possibilities, and our reader should go about ridding himself of the problem in a similar way regardless of which of the two he might be dealing with. In fact, if he is dealing with any sort of the larvae (which seems all but certain), he must take basically the same steps: he must clean and remove the creatures’ food source. Hopefully that helps our reader, and we wish him the best of luck.