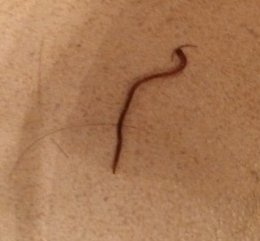 A few days ago we received a question from a reader who found what appears to be some kind of small, skinny, brown worm on his floor, or what looks like his floor. The reader didn’t give us much (or really any) information about the worm, but he did send a picture. The reader is wondering what the little brown worm is, and he is also wondering how he can get rid of “them” (implying that the pictured worm isn’t the only one he found).

First, here is the picture:

As helpful as a picture is, it would be nice to know a little more about this creature. For one, we have no idea where our reader lives, so we don’t have any geographical clues, and we also don’t know if the creature has any distinguishing characteristics. One thing we are especially keen to know is if the small curved line on what appears to be the worm’s head is actually a part of its body. It doesn’t really look like it, and instead looks like a small piece of hair, perhaps from a beard. (There are actually other pieces of hair in the photo, which is why we were able to surmise that the worm is “small” and “skinny,” even though these words essentially have no meaning except in relative terms.) However, if it is part of the worm, our reader may have found a particularly strange-looking hammerhead worm. Hammerhead worms have large, flattened heads that look like, well, hammerheads. Their heads tend to be much thicker than the thin, hair-like head (if it is a head) of the worm above, but we suppose it is possible that this is a hammerhead worm. It is unlike any we have ever seen, but obviously we haven’t seen every species.

If the worm’s “head” is actually just a piece of hair, then obviously this suggestion can be discarded. What else might he have found? Unfortunately, we really can’t say in this instance, although we are reasonably confident it is in fact a worm, as opposed to, say, a larva, which are commonly called “worms,” and which we actually write about more often than not. In other words, our reader probably found a worm as we define the word “worm.” In fact, it almost looks like he found the most classic worm of all, an earthworm, of which there are thousands of species. (“Earthworm” is a fairly generic word that is used to refer to any of the larger species of the Oligochaeta subclass.) The largest earthworms, or megadriles, tend to have a distinct and noticeable clitellum, the band around the middle of earthworms, and the above creature doesn’t, but since this earthworm appears to be quite small (i.e., it is a microdrile), this isn’t surprising. So, it is possible our reader found an earthworm, but again we can’t be at all certain of this.

Since the picture is ambiguous, unfortunately it is unclear what our reader found, and since we also don’t know where he found it, it is obviously difficult to say much about the removal process. We only have a small picture of a single worm to work from, and this doesn’t tell us anything about the reader’s larger situation.

However, we can still give our reader some advice! In general, it is good to keep areas of the house clean and dry, as this will discourage any creatures from taking up residence in one’s home. Getting rid of a household pest is generally a function of removing the conditions that drew the pest in in the first place. Second, any obvious routes into the house should be sealed off to the extent that this possible. Worms and other bugs will make their way into your house essentially no matter what, but you can keep the numbers low if you don’t invite them in through open, screen-less windows, or by keeping doors to the outside world ajar. Again, though, this is really generic advice, and we realize it may not be especially applicable to our reader’s situation.

Hopefully there aren’t many worms in our reader’s house, and if this is the case, he probably doesn’t have anything to worry about anyway. Maybe some earthworms crawled onto a moist bathroom floor through an open window to escape the sun, to give one of hundreds of possible scenarios. In any event, we wish him luck, and if he sends us any more specific information, we will take another stab at his question.

Article Name
Small, Skinny Brown Worm on the Floor
Description
A few days ago we received a question from a reader who found what appears to be some kind of small, skinny, brown worm on his floor, or what looks like his floor.
Author
All About Worms
Share the knowledge

18 thoughts on “Small, Skinny Brown Worm on the Floor”