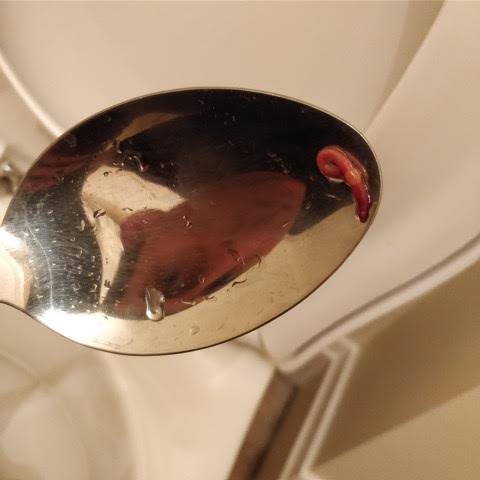 We recently received this message from a reader, “Could you please put my wife’s mind at rest? We found a small red worm in a clean toilet bowl. The toilet hadn’t been used recently. I fished it out with a spoon. Is this a parasitic worm from a human?” The picture he sent shows a tiny red worm perched on the edge of a spoon: 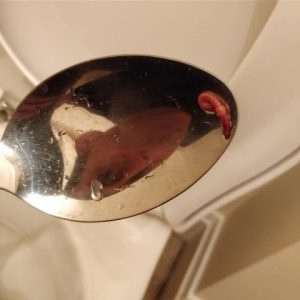 We are confident that this specimen is not a parasitic worm from a human. Rather, we believe that it is an earthworm. Earthworms are some of the most common worms discovered in toilets by our readers. We recognize this one by its red segmented body and its distinct clitellum, which is a raised band made up of reproductive organs (the light pink section in the middle of the worm.)

So, what is an earthworm doing in our reader’s toilet? We can’t say for certain. Earthworms need moisture to survive and can even live for several weeks submerged in water, as long as the water has enough oxygen in it. We think the earthworm might have swam in through the pipes, but there is no way to know for certain how it ended up in the toilet. We encourage our reader to place the worm in some soil outside and not to stress about finding it in his toilet. He has nothing to worry about as long as this is a one time discovery. If he continues to find worms in his toilet, there might be a problem with his pipes and he should contact a plumber to investigate!

In summary, a reader discovered a small red worm in his toilet. We are confident that the creature is an earthworm. We hope this article will calm the nerves of our reader and his wife! That being said, if they truly are worried that the creature is a parasite from one of their bodies, we recommend they visit a doctor. We are not medical professionals and cannot give out medical advice.

Article Name
Small Red Worm in Toilet Likely an Earthworm
Description
A reader discovered a small red worm in his toilet. We are confident that the creature is an earthworm.
Author
Dori Franklin
Comments: 0 Posted by: Worm Researcher Dori Categories: Earthworms