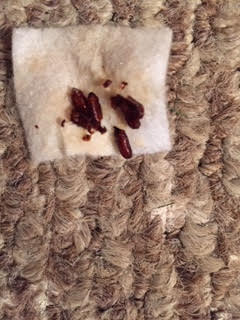 Small, brown bugs were found by this reader underneath a towel by her refrigerator in her carport, and small white worms were found near the baseboards of her home. 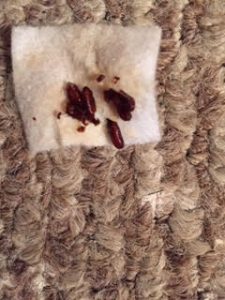 In addition to this image, our reader stated that the brown worms had legs, and that the water line had recently been disconnected from the refrigerator where she had the towel that the bugs were hiding under. To cut straight to the chase, these critters are pill bugs. Pill bugs, otherwise known as ‘roly-pollies’ because of their tendency to roll up into a ball-like shape, are crustaceans, and are not actually insects. Crustaceans are aquatic arthropods, meaning they live in aquatic habitats, they have hard exoskeletons that protect their body, and are segmented. Other animals that are included in this family of animals are crabs, lobsters and shrimp. However, what sets apart pill bugs are the fact that they are some of the few crustaceans that can survive above land for their entire lifespan.

Pill bugs tend to be 3/4-inch, oval in shape, dark brown or black in color, and sport a pair of antennae, which one can make out if one zooms in close enough on the image sent in by our reader. Furthermore, pill bugs prefer moist environments for their habitats, which explains why this critter was found under a wet towel by our reader’s refrigerator. In addition to this, the diet of pill bugs consists of rotting plants. Now, as far as we know, one must unplug a refrigerator prior to disconnecting it from the waterline, and depending on how long the refrigerator remained unplugged, or remains unplugged, it would make sense that pill bugs would be attracted to the food going bad in the refrigerator. Also, if there was any bits of vegetables somehow left around or underneath the refrigerator when taking things out of it, that could explain their appearance as well.

In regards to the white worms found near our reader’s baseboards, those are probably just the larvae of the pill bugs, as they are white in color. The one in the image looks very dried out though. This makes sense as our reader mentioned that the white worms were found in a different room than the matured pill bugs, and if left in a dry environment for too long, pill bugs will dry out and die. 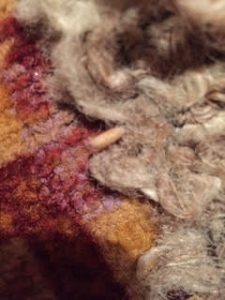 Now, in order to prevent more pill bugs from entering her home, our reader should make sure to keep her home dry, clean and free from any scattered bits of vegetables or house plants. With respect to the pill bugs already found, we urge our reader to move them outside to a moist location with plenty of vegetation for them to feed on. As pill bugs do not carry any disease or contaminate food, our reader needs not be concerned about handling them, or be worried about the food they may have gotten to. Naturally, one should always wash their vegetables anyway, as there may be bug faeces or eggs on them!

To conclude, the dark brown bugs our reader found under her towel, as well as the white larvae she discovered on the baseboards in her home, were pill bugs! These harmless critters are commonly found in the home, and are nothing to be feared.

Article Name
Small, Dark Brown Bugs Under Towel are Pill Bugs
Description
Small, brown bugs were found by this reader underneath a towel by her refrigerator in her carport, and small white worms were found near the baseboards of her home.
Author
Worm Researcher Anton
Share the knowledge

This many people searched for this info: 1,567