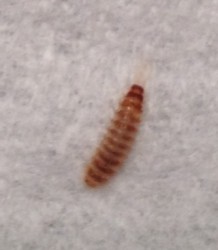 Small, Brown Worms with Stripes on the Counter

A reader recently wrote to us about, as the title of this article suggests, a small, brown worm with stripes on the counter. (The worm was on the bathroom counter, more precisely.) The reader sent pictures of the brown striped worm and was merely wondering what it is. She was very matter of fact in her email, not seeming particularly alarmed by the small worm, nor did she ask how to get rid of it, so we presume she is dealing with an isolated incident and not a recurring problem. (She did add the word “blah” after her short email, so she wasn’t altogether happy with finding the worm either.) So, we have a simple question before us: what is the small, brown, striped worm on the bathroom counter that our reader is finding.

Let us begin with the reader’s picture: 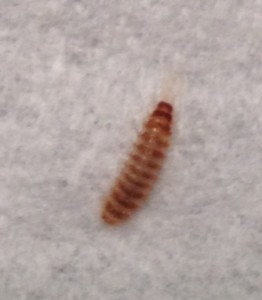 The reader also sent this screenshot of what we presume is her iPhone: 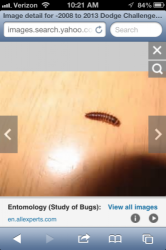 We’re not entirely sure what to make of these images. The pictures seem to feature different creatures because their body color and stripes don’t seem to perfectly match – they are also obviously on different surfaces – although this conceivably could be a matter of lighting. In any case, they certainly appear to be the same type of creature (whether the reader took both photos is unclear), and we are fairly confident this creature is a carpet beetle larva. And since we think it’s a carpet beetle larva, the “worm” our reader found is not in fact a worm.

Carpet beetles are a type of skin beetle, the various species of which make up the family Dermestidae. Carpet beetle larvae are one of the most common (perhaps even the most common) creatures we write about. People seem to find them all the time, and we probably answer a question about them every month or so. For this reason, our reader certainly didn’t find anything unusual, and the fact that they are found all the time of course lends support to our “carpet beetle larva” hypothesis. In general, carpet beetle larvae remain out of view, preferring to stay in dark parts of the house, like in closets or under furniture, but it isn’t strange to find them in the open, like on a counter. They are regarded as a pest because they eat a variety of different fabrics, including carpets, but also things like furniture and bedding. There are a number of different carpet beetle species, but based on the colors (brownish/tan with dark stripes) of the creature pictured above, we think our reader found a varied carpet beetle larva, but we can’t be certain of this.