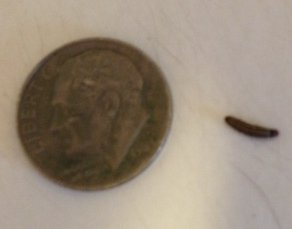 A reader wrote to us the other day about “little worms all over [her] laundry room,” which is near a closet that holds the trash. The small, brown worms are “all over the walls, the floor, the trash/closet, washer/dryer, even hanging from the ceiling from single thread webs.” However, they are only in this one area of the house, so apparently the worms originated in this area and haven’t spread. The reader is wondering what the brown worms are, why they are in her house, and how to get rid of them.

Fortunately, the reader sent in several good photos of the creatures she is finding. The first shows one by a dime to give you an idea of their size:

And the second is close-up shot: 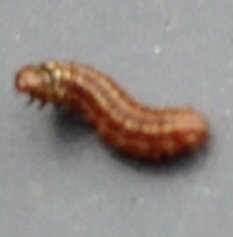 One thing we know for certain is that our reader is not dealing with worms, but rather insect larvae. The creatures pictured above clearly have legs immediately behind their heads, and while not all larvae have legs, worms do not have legs. We should note that the word “worm” doesn’t have a scientifically precise meaning, so it isn’t necessarily wrong to call any given creature a “worm,” as our reader has done in her email, but we prefer a slightly more restrictive definition of the word so that our language can better organize the world.

As for what kind of larva, it is hard to be certain, but we think the best case can be made for inchworms, which are the larval form of geometer moths, making them caterpillars. (You can see why the word “worm” is problematic – it is used here to describe a caterpillar, and there seems to be no good reason to do this. “Caterpillar” is already a common, widely understood name – why must they be “worms” too?) We make this suggestion primarily because inchworms produce and hang on silk threads, which is evidently something the reader’s creatures are doing from her ceiling. In addition, inchworms have visible thoracic legs, as do the creatures above, and this fact, coupled with their thread production, seems to support the inchworm hypothesis. (Examining larvae legs and/or prolegs, or their lack thereof, is one of the best ways to identify them.)

This leads us to our reader’s other two questions, which are harder to make sense of if she is in fact finding inchworms. First, the common species of inchworms (like the two species of cankerworm) that people come in contact with are almost always found on trees. In other words, inchworms are not really a household pest – generally they are only the concern of people with nice trees in their yard. This doesn’t mean that they couldn’t be found in a house, as the case of our reader evidently shows (assuming our identification is right, which of course we aren’t certain of), but it does mean that the reader probably doesn’t need to worry about any sort of prolonged infestation in her house. Indeed, she said that when she took out one bag of trash, she hasn’t found any more in her house, and she probably shouldn’t, as inchworms are after tree foliage. She might have already solved the problem.

So, we don’t know why inchworms ended up in our reader house, and in fact we aren’t certain she found inchworms, but we can’t think of any other way to explain the creatures hanging from the ceiling on threads. It’s obviously not impossible to imagine scenarios that brought them inside – they could have infested outside trees, and been drawn to something in the trash can by the laundry room, for instance – but it is a little peculiar. In any case, that is our best suggestion, and hopefully we’ve pointed our reader in the right direction.

Article Name
AAW - Small Brown Worms on Trash Cans and in the Laundry Room
Description
The small, brown worms are "all over the walls, the floor, the trash/closet, washer/dryer, even hanging from the ceiling from single thread webs."
Author
All About Worms
Share the knowledge

4 thoughts on “Small, Brown Worms on Trash Cans and in the Laundry Room”