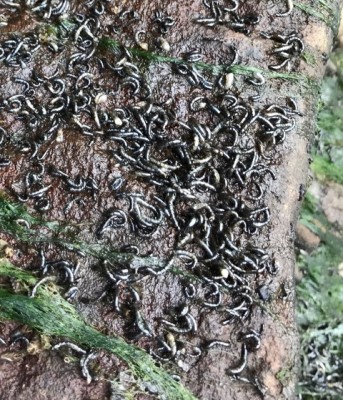 March 8, 2019
We recently received a short message from one of our readers in San Carlos, California. She wrote, “I found these when I turned off the waterfall in my koi pond. There are so many. She would like to know what they are and if they are harmful to the pond or the fish that live in it. She sent us a photo and also wrote out a description, “They are small, solid black with segmented bodies.” 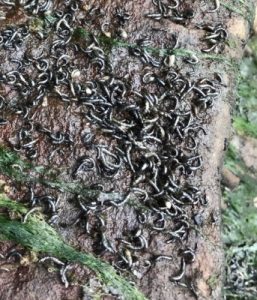 Based on the description and photo, we think these are either black fly larvae or leeches. Both species are small, black, worm-like organisms that can live in ponds. Let’s discuss both to see which seems like the better fit. We’ll start with black fly larvae.

Black fly eggs are laid in running water, and when the larvae hatch they attach themselves to rocks. They use tiny hooks at the ends of their abdomens to hold on to the slippery surface of the rocks, allowing them to thrive in moderate to fast currents, which would explain how they were living underneath a waterfall. They eat by expanding a fan-like appendage that surrounds their mouth, catching passing debris like small organic particles, algae, and bacteria. They rely on the current to bring them food, and they are extremely sensitive to water pollution. Black fly larvae generally do well in ponds because of the high levels of organic content. The larvae pupate underwater and emerge as adult flies. Some adult species are known to transmit diseases, such as river blindness, but the larvae are harmless and are actually very beneficial to the environment.

Leeches are also small, black, worm-like organisms that live in ponds. There are about 700 species of leeches, and about 500 of those species prefer freshwater environments to marine or terrestrial habitats. Leeches attach themselves to vertebrates and invertebrates and feed on their blood. Once they’ve gotten their fill, they will detach themselves and find a new place to live. In a pond, they will probably gravitate towards the sludge that lines the bottom. Since these were found on the sides of rocks, not at the bottom, we aren’t sure if they could be leeches. If they are leeches, our reader doesn’t need to worry. Fish love to eat leeches, and our reader’s koi will likely keep the leech population in check. We don’t recommend that our reader try to remove these specimens by hand, because they might attach to her skin.

To wrap up, we believe the small black organisms our reader found in her pond are either leeches or black fly larvae. Both are similar in appearance, though leeches are slightly bigger, and both are commonly found in ponds. Neither species are considered invasive and neither should damage her pond or cause any problems with the fish!

Article Name
Small Black Worms Take Over Koi Pond
Description
We believe the small black organisms our reader found in her pond are either leeches or black fly larvae. Both are similar in appearance, though leeches are slightly bigger, and both are commonly found in ponds. Neither species are considered invasive and neither should damage her pond or cause any problems with the fish!
Author
Dori Franklin
Comments: 0 Posted by: Worm Researcher Dori Categories: Leeches