We receive questions about a staggering variety of worms and other worm-like creatures, making our job as worm identifiers difficult (but also interesting). However, a lot of readers inquire about the same kinds of worms (or larvae), like black soldier fly larvae, which seems to come up all the time, most recently from a reader who found them on his porch. We receive questions about these “worms,” as reader’s often refer them (even though they aren’t actually worms), because black soldier flies (and especially their larval form) are common. We have to admit we sometimes like writing about what’s familiar. We are getting ahead of ourselves, however, because we aren’t entirely certain our reader found black soldier fly larvae. So, let us first tell you what our reader found and show you the best picture he submitted, and then we’ll explain why we think he found black soldier fly larvae.

As we said, black solider fly larvae are quite common, to the point where they have their own frequently used acronym – BSFL, not surprisingly. We mention this now so we can start writing “BSFL” instead of “black soldier fly larvae.”

Anyway, here is a picture the reader submitted to us of what we believe are BSFL: 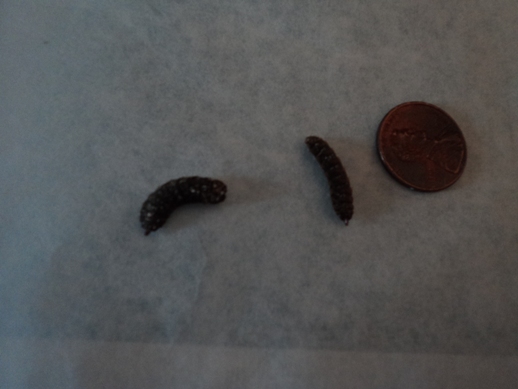 Again, the reader found these on his porch, which has some rabbit and turkey feed on it (although, as far as the reader could tell, this wasn’t being eaten by the creatures he found). The alleged BSFL also have hardened bodies, and they didn’t appear to be moving much. The reader was not only wondering what these creatures might be, but also if they could be harmful to himself or his animals.

We’ve written about BSFL a few times before, so if our reader cares to learn more about these creatures, he should check out this overview of black soldier flies and their larval form, and he might also be interested in reading an article about BSFL that was written in response to a reader question about them. There isn’t much of a reason to repeat what we said in these two articles, so we’ll stick to the basics to explain why we think out reader found BSFL.

Black soldier flies, which go by the scientific name Hermetia illucens, are about 1/8 to 3/4 of an inch (3 to 18 millimeters) in length, and the creatures pictured above fit in this range. They range in color from light tan to black, and they have segmented bodies that are hardened. Again, this is all consistent with the description and picture our reader sent us. Much more can be said about BSFL, but this is not the place to say it (in part because we have already said it). We’re just trying to answer our reader’s question.

Speaking of which, the reader asked if these creatures are dangerous to himself or his animals. From all we have ever read about BSFL, they are not harmful at all. In fact, they are commonly fed to animals (especially reptiles), so we can see no reason why they would pose any threat to the reader’s animals (or the reader himself – there are lots of pictures of people holding hoards of BSFL in their hands). Moreover, when BSFL and the adult form are around, they compete with other types of flies, like the ever-annoying house fly, so they can actually be helpful to have around. (Why replace house flies with black soldier flies? Because the latter hardly fly around, and since they don’t move when people touch them, they are easy to relocate.)

To sum up, we are fairly sure our reader found black soldier fly larvae, and he has nothing to worry about. They are harmless creatures that actually have a lot of uses.

This many people searched for this info: 7,924