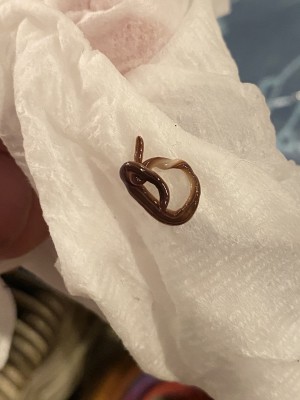 “Flatworm?” asks this reader, who found a peculiar critter in his shower. The critter in question appears to be black in color, with a gray/beige underside, and a thin, but long body that is able to curl up on itself.

Firstly, we wish to thank our reader for the fantastic pictures he sent in. The level of detail here is excellent and is very helpful. Secondly, we want to confirm our reader’s suspicions of this being a flatworm. This is given away by the flat shape of the creature’s body, as well as the two lighter-toned stripes one can make out running the length of the worm’s body. What species of flatworm it is specifically we cannot say; there are more than 25000 that live across all types of terrain. There are marine flatworms that live in the depths of the ocean and parasitic flatworms that can cause immense damage to their hosts.

The stripes on this worm are quite characteristic of a hammerhead flatworm, which is a type of flatworm (of which there are many more countless species) that has a shovel, or hammer, shaped head. The thing is, in only one of these photos does the worm — sort of — appear to have what could be a hammer-shaped head (see photo below). In the first photograph, neither end of the flatworm fan out like the head of a hammerhead worm. However, we do not think this rules out this worm as a hammerhead flatworm. Given their bodies’ flexibility, perhaps this worm was able to retract its head somewhat as a defence mechanism. Or maybe it even lost its head somehow! Hammerhead worms are able to survive if body parts are cut off, and can regrow whatever part is lost, so this is not outside of the realm of possibility. So, we will continue under the assumption that this is a hammerhead flatworm, as its appearance and size suggest this is still very likely. 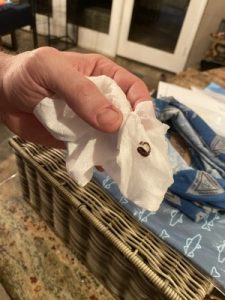 The purpose of this creature’s spade-shaped head is hunting. As the hammerhead flatworm is a predatory worm, it uses chemoreceptors on the underside of its head to measure changes in the levels of CO2, oxygen and pH in the air left behind by animals, which they can then track and kill. This is pretty incredible if you ask us. Hammerhead worms are also cannibalistic, meaning they eat other hammerhead worms; they are not picky eaters! Despite this, they pose no direct threat to humans. Hammerhead flatworms are not parasitic, unlike their cousin the tapeworm, and will not attempt to eat an animal which is that much larger than their own size. That said, hammerhead worms do possess toxins in their body that can be harmful to the body if ingested. One such toxin is tetrodoxin, also found in puffer fish and some species of octopus, and it is used in hunting. When secreted onto a subject, tetrodoxin will paralyze the victim, making it easier for the hammerhead worm to eat their prey with little struggle. In addition to this, they can also secrete a substance which essentially disintegrates their prey so that they can slurp them up like a gooey, meaty milkshake. It is rather disgusting. But one cannot argue that it is not convenient!

So, while hammerhead flatworms naturally occur in many environments, they do not thrive in the shower, or in a human home whatsoever. For that reason, there is virtually no risk of infestation when it comes to hammerhead worms (unless there are multitudes of invertebrates roaming our reader’s house, begging to be eaten by this hammerhead worm). It is likely the worm just ended up there by accident. Perhaps it was following a stray earthworm up the pipes (as earthworms are more likely to be found crawling up one’s drain) for a snack, and then ended up in our reader’s bathroom.

To conclude, the worm our reader found in his shower is most likely a hammerhead flatworm. These critters are quite amazing once you look into their biology and behaviour, and if our reader would like to further educate himself on all matters relating to hammerhead worms, then he is welcome to check out a previous article we wrote that goes far more in depth. Whilst hammerhead flatworms are not dangerous to humans directly, they should still be handled with caution, just like any worm, as one could potentially experience an allergic reaction to handling the worm, especially if it were to excrete any of its toxins. We recommend that our reader simply put the worm outside using some gardening gloves and a dustpan. Then he can get on with his life worry-free!

Article Name
Slimy, Brown Worm Found in Shower is a Hammerhead Flatworm
Description
"Flatworm?" asks this reader, who found a peculiar critter in his shower. The critter in question appears to be black in color, with a gray/beige underside, and a thin, but long body that is able to curl up on itself.
Author
Worm Researcher Anton
Share the knowledge