A reader recently wrote to us about a black worm she found on the wall of her house. The worm is also described as “slick” and is about four inches long. The reader’s house is on the east coast of Florida, in a town called Fort Pierce. So, the reader’s worm is from Florida – it is a Florida worm, if you will, although of course the worm she discovered might be found in any number of other places depending on what it is. The reader was also concerned if the worm is dangerous or harmful, as she has a nine-month-old baby in the house. What is this black, slick worm from Florida, and is it harmful?

The reader sent in this picture of the worm: 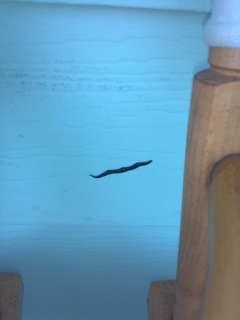 This isn’t the most detailed picture of the worm, but we can at least see that it is somewhat long and black (or possibly a really dark brown). The reader said that she thinks it is the same worm that another reader sent us a picture of a few months ago, which you can find in this article about the long, black worm he found.

That reader never told us where he found the worm, so we’re not sure if he discovered the creature in Florida too. The two worms do look very similar, though, so we think there is a reasonably good chance they found the same type of worm. Unfortunately, we are in the same position now as we were when we attempted to answer the other question, which is to say we are not sure exactly what our reader from Florida found.

Since the reader found the worm on her house, we know the worm is a terrestrial species, meaning it’s not a ribbon worm, which is a creature we speculated about when answering the other question. The only other thing we were able to say to the other reader is that he perhaps found a worm that belongs to Oligochaeta, a subclass of animals in the phylum Annelida. There are approximately 10,000 species in this subclass (about half of all annelids), several of which are the various types of earthworms. The worm pictured above does indeed look like an earthworm, although it doesn’t have a clearly discernible clitellum, a thickened section of body wall found in the middle of earthworms and leeches. And speaking of leeches, this is another possibility. Leeches also belong to the phylum Annelida, although they are in the subclass Hirudinea (and thus are not oligochaetes). Most of the 700 species of leeches live in water, but there are nevertheless about 90 terrestrial species, so it is definitely possible to find them outside of aquatic environments. It is also possible to find leeches clinging to vertical surfaces like walls, just as the creature pictured above is doing.

If our reader found some sort of earthworm, it shouldn’t pose any threat to her baby. However, given that (among other things) the reader found the worm attached to the wall and we haven’t heard of earthworms doing this, we aren’t very confident that the reader found an earthworm. We also can’t be too confident that she found some type of terrestrial leech, but if she did, she should exercise caution and get rid of it. Most leeches feed on the blood of various types of animals, including humans, so she definitely wants to take care if the creature is around her child.

Unfortunately, we just aren’t sure what the black, slick worm our reader found in Florida is. It would appear to belong to the phylum Annelida, but we recognize how limited of a response this is. We would recommend that our reader investigate leeches more because she is worried about her baby. If she found a leech, she should get rid of it and stay vigilant, but if she didn’t, there is likely nothing to worry about (because she very well might have found some sort of harmless worm). However, we can tell our reader that her question appears to be rather common – while researching possibilities, we did see several questions related to black worms found around the house in Florida. Alas, there weren’t any answers, but we’ll keep our eye on this creature to see if we can find definitive information, and if we do, we’ll be sure to write an article about it.