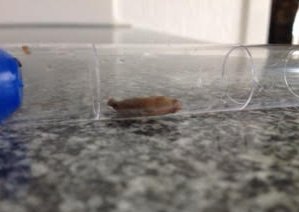 A reader wrote to us about a rash her son has in response to what is believed to be a leech bite. She found what looked like a leech on her son’s PE kit after rugby practice, and it was at this time that she noticed his skin reaction, which began as a red spot, and then spread into an itchy rash that covered parts of his body, arms, and legs. The reader has already sought medical help, and her son has been prescribed antibiotics. She only wrote to us to ask if we have ever heard of this sort of skin reaction occurring in response to a leech bite, and also to determine if what she found was in fact a leech.

Before looking at any pictures, we must make it abundantly clear up front that we are not medical professionals, and nothing we say should be taken as medical advice, which we won’t be dispensing in any case. The reader did exactly as she should have done by going to a doctor, and it sounds like her son is already undergoing what her doctor has determined to be the appropriate treatment for his rash. The doctor’s advice is what matters – we can only offer a few thoughts on leeches.

With that point emphasized, here are the pictures our reader sent in. If people are experiencing similar problems, they should go to a doctor.

This is what the rash looked like when it was first noticed: 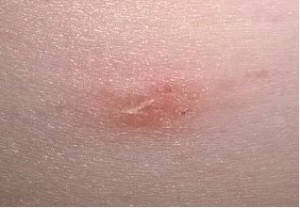 And this is what it looked like after three weeks: 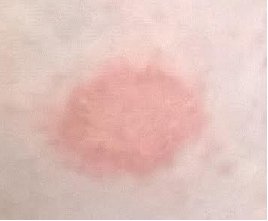 (This second image was quite large and blurry, so we just extracted the main segment of it. Around this red spot are what appear to be red bumps that are scattered about in no particular pattern. It looks like, in short, an itchy rash, precisely as our reader described it.)

And finally, here is the creature that our reader found on her son’s PE kit:

As for what this creature is, our reader is in a better position to determine this. This does look like a leech, but we can’t tell if it has suckers on both ends of its body, and this is something the reader should be able to see for herself. If it does, this is a leech. If not, it is difficult to say precisely what it is, but it might be some sort of slug. Overall, though, we think it is a leech because latching onto, and staying attached to, clothing is exactly what a leech would do, and this is what happened with our reader’s son. Eventually, the leech would make it through the clothing and attach onto his skin, which may not have happened in this case, as the leech wasn’t attached to the reader’s son’s skin, but only his clothes. Leeches don’t just indiscriminately bite people – they attach and feed, although they will fall off after about 20 minutes or so, according to an Austin Health guide to leech bites. (Austin Health is a hospital in Australia.) So, perhaps the leech was on the reader’s son’s body, and then fell off.

We dwell on the nature of leech bites because it is not clear that the reader’s son’s skin reaction has anything to do with the leech. In other words, the leech might be a red herring, diverting attention away from whatever actually caused the skin rash. Leeches aren’t poisonous, and as far as we know, they don’t cause allergic reactions either. Bites can, however, become infected, and perhaps this is why the reader’s doctor prescribed antibiotics. Again, though, we have nothing to say of medical relevance about the rash because we aren’t qualified to comment on it.

So, to sum up our thinking, we think it is reasonably likely our reader found a leech, and she could confirm this suggestion by checking the creature for anterior and posterior suckers. Assuming that she found a leech, it still isn’t clear that the leech is causing her son’s rash, and in fact there is reason for thinking the leech isn’t causing the problems since leeches generally aren’t known to cause allergic reactions. However, our opinion doesn’t matter when it comes to causes and treatments for the rash, and it sounds like the reader has already pursued the appropriate course of action as concerns medical care.

Article Name
Skin Reactions to Leech Bites (with Pictures)
Description
A reader wrote to us about a rash her son has in response to what is believed to be a leech bite.
Author
All About Worms
Comments: 0 Posted by: Worm Researcher Evan Categories: Leeches