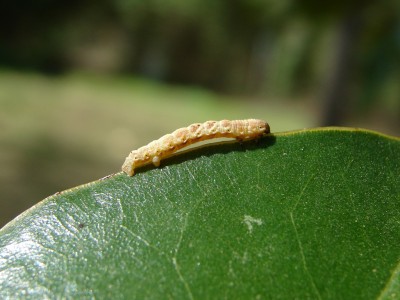 A man recently wrote to us wondering why he finds “silk cream white worms” in his yard and room after it rains. He did not include any other information or photographs.

Since we cannot know what species this is, we will discuss a couple silk-spinning species. He can decide if either of them sound right.

When someone hears about a worm spinning silk, it is natural to think of the domesticated silkworm. This is the larva of the silk moth, the Bombyx mori. This species got its name because it creates large quantities of silk. 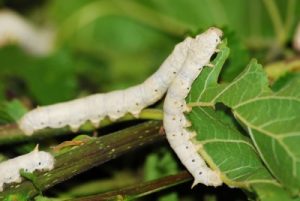 Bombyx mori are bred so humans can harvest and use their silk. This has occurred for hundreds of years, as shown by the drawing below from the 13th century. 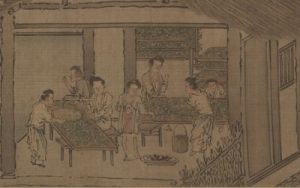 However, Bombyx mori are thought to be extinct in the wild. This is partially due to their specific dietary needs. They primarily eat white mulberry leaves, though they will eat other types of mulberry leaves if they must. So, unless our reader has mulberry bushes, it is unlikely that he is encountering Bombyx mori larvae.

It is more likely that our reader has found some sort of inchworm, as these are common in many parts of the world and spin silk. Inchworms are the larvae of moths belonging to the family Geometridae. They were once called “measure worms” because they appeared to be measuring the earth as they moved. There are many species referred to as inchworms, and some of them are a cream color in some of their instars. 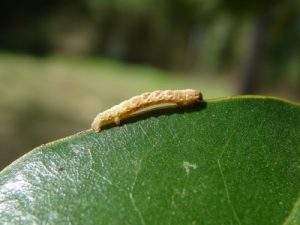 An inchworm (species unknown). Photo by Thegreenj (Own work, CC-BY-SA-3.0, via Wikimedia Commons)

However, there is no particular reason, that we know of, that these animals would be more common after rain. So, though inchworms may be the most common possibility, it is not necessarily the correct species. We are sorry we have been unable to help our reader find a more definite identification.

Article Name
Silk Cream White Worms May be Inchworms
Description
A man recently wrote to us wondering why he finds “silk cream white worms” in his yard and room after it rains. He did not include any other information or photographs.
Author
Alexis Rodriguez-Carlson
Comments: 1 Posted by: Previous Author Categories: Garden Worms, Inch Worms, Interesting Worms, Silk Worms