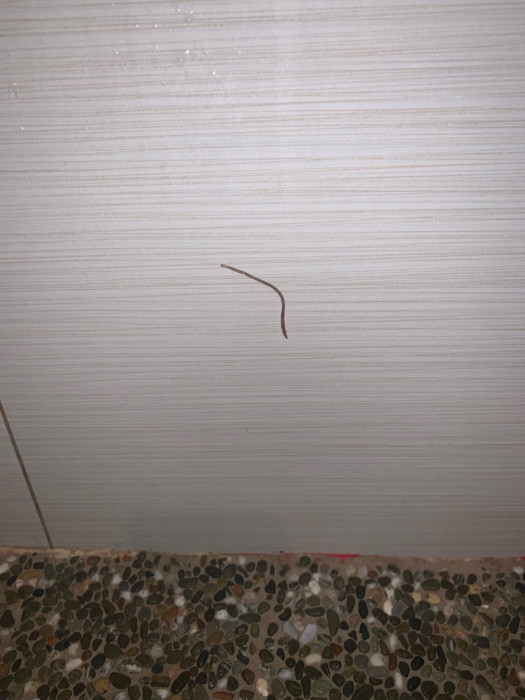 “I live in Austin Texas and found this worm in my shower. It was about 2 inches long”, states this reader with regard to the long, pink-brown worm-like creature photographed below. “Do you know what kind of worm this is?” 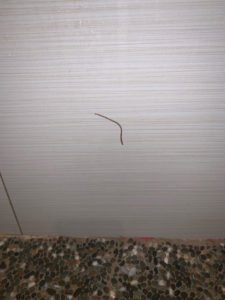 “There aren’t any windows in the bathroom so I’m not sure how it got in. I’ve seen one before dried up on the floor, but I didn’t think anything of it until seeing this one crawling on the shower wall.”

At first, we thought this worm might be an earthworm. Its shape and coloration, as well as its location of discovery seemed to point toward this conclusion. That said, earthworms tend to have a clitellum, and this worm does not. Now, it is not impossible for an earthworm to not possess a clitellum: in fact, sexually-immature earthworms tend not to have one. However, there is a worm that better fits the description of this one, and that is the bloodworm.

Now, the term ‘bloodworm’ is very general. It actually refers to a whole host of various worm species that all share one thing in common, the color red. In particular, they share an ability to sustain for long periods of time without oxygen due to an excess amount of hemoglobin-like molecules which turn their bodies red. We think this worm is a red wiggler, which is a type of earthworm, as well as a type of bloodworm.

Red wigglers seek out places that are filled with decomposing organic matter, and so oftentimes they find themselves in the sewage system via an exposed or broken pipe. So, it is possible that our reader is experiencing a leak somewhere in her sewage pipes underground, and the red wiggler found this gap and crawled up to her bathroom via the drains. That would explain how the worm entered the bathroom without the need of an open window.

Telltale signs that point to an underground leak include: foul-smelling water, a decrease in water pressure, and discolored water. If our reader thinks it might be the case that she is experiencing a leak, then she should call a professional to deal with the matter. Otherwise, things she can do to prevent more worms from coming up her drains is to keep her bathroom and the drains very well-cleaned. Pouring boiling water ??——followed by some bleach and then boiling water again—?— down one’s drains can be very effective in stripping the decomposing organic matter from the pipes and preventing the attraction of worms and other critters.

In conclusion, we think that the worm our reader found in her bathroom is a bloodworm, specifically a red wiggler. They are not harmful to humans, but their presence can indicate a leak somewhere underground. We hope this article helps, and we wish her the very best.

Article Name
Short, Brown Worm Found in Shower May be a Bloodworm
Description
"I live in Austin Texas and found this worm in my shower. It was about 2 inches long", states this reader with regard to the long, pink-brown worm-like creature photographed below. "Do you know what kind of worm this is?"
Author
Worm Researcher Anton
Share the knowledge

People helped by this info: 755