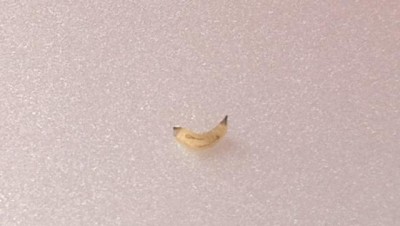 One of our readers reached out to us to voice her concerns about finding various worms in her RV.  Just when she thinks she has found and disposed of the final one, another one pops up. The situation is causing her a lot of anxiety. She hopes we can identify the creatures and put her mind at ease.

She sent us a nine photographs. In many of the photos, we couldn’t find the subject (i.e. the worm-like organism.) So, we didn’t publish all of the photographs.  Finally, she explained: “Some of them appear on my glasses, and I can feel them on my lashes. Others have left a tiny pin hole in my skin, I look down and I notice I am bleeding.” This description raised a red flag for us. We will go through a few of the photos, but we think our reader should go see a doctor. If she is experiencing physical harm from these creatures, or thinks they could be parasitic, we think visiting a doctor is the best course of action.

Alright, on to the photographs. Here is the first one: 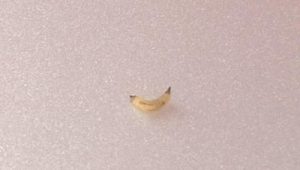 We think this specimen is likely some type of larva. It could be a fly larva, as there are many species of fly larvae that look similarly to this creature. Or it might be a moth larva, which is a caterpillar. It is hard to determine which it is without a more detailed image or description. Knowing what items the specimen was discovered near could be quite helpful, because those clues can provide some information about its preferred food source.

This next photo shows a black organism on a white background: 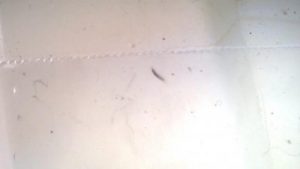 We aren’t sure what type of creature this is either. It appears to be quite small, which leads us to believe it is probably some species of larvae as well. As we explained with the prior photograph, it is very difficult to determine what type of larvae this is without knowing where it was found or how it was behaving.

We believe the subject of this photo could be the thin white line down the middle of the glass: 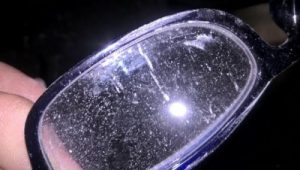 Again, we aren’t confident that we can identify this specimen. We assume this is the creature that our reader feels in her eyelashes, and that has appeared on her glasses. There are tiny parasitic mites that live near the hair follicles of mammals, they are known as Demodex. In humans these are referred to as “eyelash mites”. There are two known species of eyelash mites that infect humans, but neither of them are white, thin and long.

In conclusion, we received a concerning message from one of our readers. She continuously finds various worms in her RV. Since understanding that some of these creatures are causing her harm, we encourage her to seek advice from a medical professional immediately. She also might want to have her RV professionally cleaned, or have it assessed by pest control. 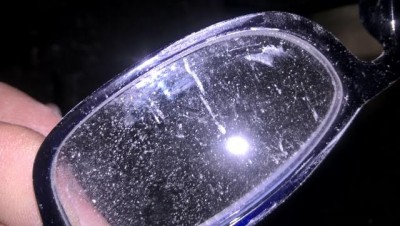 Article Name
Several Types of
Description
One of our readers reached out to us to voice her concerns about finding various worms in her RV. Just when she thinks she has found and disposed of the final one, another one pops up. The situation is causing her a lot of anxiety.
Author
Dori Franklin
Comments: 0 Posted by: Worm Researcher Dori Categories: Caterpillars, Gross Worms, Parasite Worms