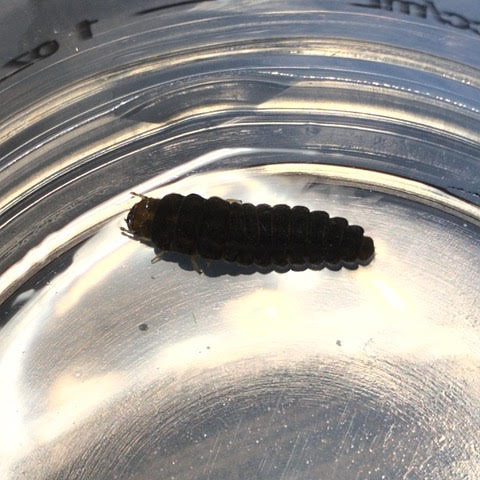 “Last night I noticed something moving on one of my pillows and found this little guy”, states this reader about the black worm-like creature pictured below. “Through research and your site I think it’s a larva of some sort. Almost looks like a cutworm but the markings are wrong. My bed is under a window so I think that’s how it got in. I didn’t have a macro lens for my camera so this was the best shot I could get with a tripod. It looks like it only has these three sets of legs and is black with a reddish head. It’s roughly 13mm long by 3mm wide. Any ideas?”

Firstly, we want to thank our reader for the excellent photo and the abundance of context. It really helps us narrow our scope when thinking about what this creature might be. Secondly, based on the information provided, we think that this is a soldier beetle larva. These beetles are pretty common, but they tend to stay outdoors, which makes its presence on our reader’s pillow somewhat peculiar. That said, they have been known to accidentally find their way into people’s homes, and we think our reader is probably correct in assuming it came through his open window. The adult beetles are often nicknamed ‘leatherwings’ because of their leathery, soft wings, which allow them to fly into people’s homes, just like their larvae’s legs allow them to climb walls and do the same. The name ‘soldier’ comes from the beetle’s bright colors, which some think mimic a uniform. 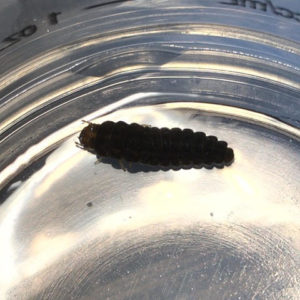 Both the beetles and larvae alike are harmless to humans, though it should be noted that they are predators, so it is likely that they bite. For that reason, we advise caution if and when handling this larva: perhaps scooping it onto a dustpan before putting it outside (which is what we recommend doing) is a good idea to avoid skin-to-skin contact. With that in mind, the beetles and larvae only prey on soft-bodied insects and other critters smaller than them, as well as the nectar and pollen of flowers, so they should not bite unprovoked.

To conclude, the black worm-like creature that our reader found on his pillow is a soldier beetle larva. They are not to be feared and do not purposefully infest homes, so our reader can simply move this creature outside. We hope this article helps clear things up and we wish him the very best!

Article Name
Segmented, Black Worm-like Creature Found on Pillow is a Soldier Beetle Larva
Description
"Last night I noticed something moving on one of my pillows and found this little guy", states this reader about the black worm-like creature pictured below. "Through research and your site I think it’s a larva of some sort."
Author
Worm Researcher Anton
Share the knowledge

This many people searched for this info: 110