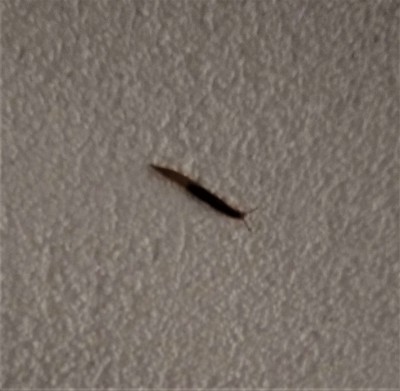 “Blimey!” says this reader, who found “the thinnest slug” that he has ever seen. The slug in question appears to be minuscule in size, our reader including an “inch-wide star handrail” in the photograph he sent in for size comparison, and is a dark brown color. 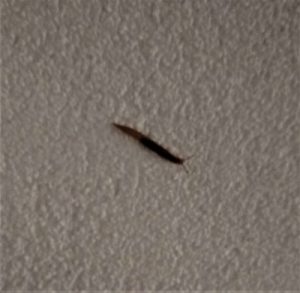 The slug was found in Battersea, London, and the photograph of it was sent in as a response to a previous post, though our reader was not clear which one it was a response to. Other than the excellent photograph and context provided, which we are grateful for, our reader did not pose an actual question to go along with his inquiry. Thus, we are not sure what response our reader may be hoping for, although at minimum our response is “awesome picture!” Nonetheless, we reasoned that it might be helpful just to provide some general knowledge on slugs for any reader that might be curious.

Slugs are common garden pests that are vastly disliked; this is due to their slimy exteriors and harmfulness towards vegetation. In regards to the former reason for slug-hate, many call slugs the snail’s ‘ugly cousin’, which we think might be a harsh assessment. Additionally, with respect to the latter, despite their slow movement, slugs can rapidly chew through the leaves and/or stems of various plants and cause serious damage to a garden. However, although the slug’s appearance may not be the prettiest, and is quite boring in its uniformity, not many stop to consider the possibility that slugs are actually complex creatures.

We are not going to advocate for the possibility that slugs are super intelligent beings, and are mentally complex, but their biology is actually quite incredible. First of all, slugs kind of are the cousins of snails, being the evolved form of snails who have just lost their shells. Secondly, the gooey white-green ‘snail trail’ that slugs leave behind is actually a pathway they leave behind for themselves so they can find their way back to their underground dens where they live. Thirdly, one might assume that slugs must be very easy catches for the predators that hunt them, given the slow speed at which they move, but this assumption would only be partly correct. Although it is no challenge for a predator to catch a slug, these slimy creatures have incredible defense mechanisms set in place that can actually get them out of such a sticky situation. Not only can they secrete a nasty-tasting mucus that might make the predator spit the slug back out, but they can also ‘self-amputate’ the part of their body that is inside the predator’s mouth and get away that way. Fun fact: whatever part of a slug you cut off, it will grow back, even if it is the head!

In conclusion, this has been an article addressing some general facts about slugs. We guess that the slug our reader found was very young, which would explain its size. We hope that this article has been of some value to our reader, for whatever reason he sent in his photograph, and that it was enlightening for others.

Article Name
Remarkably Thin Slug Found in Battersea, London
Description
"Blimey!" says this reader, who found "the thinnest slug" that he has ever seen. The slug in question appears to be minuscule in size, our reader including an "inch-wide star handrail" in the photograph he sent in for size comparison, and is a dark brown color.
Author
Worm Researcher Anton
Comments: 0 Posted by: All About Worms Categories: Garden Worms, Pest Worms, Slugs