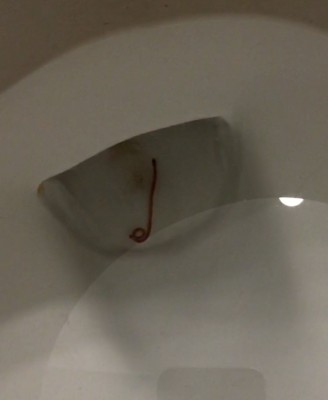 A red/brown worm was spotted in this woman’s toilet after her cousin used the bathroom. She states that she has never experienced any worms in her bathroom before, and asks if she should be worried. 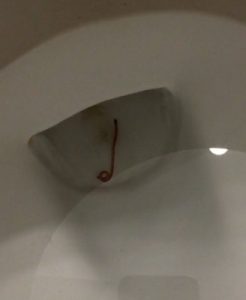 We should start off by saying immediately that it is our opinion our reader has nothing to fear, and her cousin needs not worry either. Although it is difficult to tell from the image the smaller details of the worm, we would suppose that this worm was either an earthworm or some kind of bloodworm, as those are both types of worms that often appear in people’s toilets. In the case of the earthworm, this is because they have likely ended up in the piping as a result of burrowing underground and finding an entryway. They have then swam up the toilet as there has been some organic matter for them to eat, which is a fairly conspicuous sign that the toilet is not being consistently and/or properly cleaned.

Like the earthworm, most species of bloodworm also feeds on organic matter, and specifically decomposing organic matter. But neither earthworms nor bloodworms are harmful toward humans, and are not parasites. Despite their name perhaps suggesting otherwise, bloodworms get their name based on the blood-red color they sometimes are as a result of possessing an excess amount of red blood cells which lets them survive in underwater conditions.

It is not likely that this is some other type of parasitic worm that our reader’s cousin left behind after using the bathroom, as the most common intestinal parasites do not look like this, and do not get this big (besides the tapeworm, which — again — does not resemble this worm). Nonetheless, we understand that finding worms in one’s toilet is not preferable. In terms of what to do with the worms found, we advise taking them outside and placing them somewhere they will thrive, with lots of organic matter for them to feed on, such as a nearby pond or forest. To prevent more worms from coming up one’s toilet, a consistent bathroom-cleaning routine should do the trick.

To conclude, our reader does not have to worry about the worm she found in her toilet, as it is likely just an earthworm or bloodworm. Neither of these worms are dangerous, venomous or parasitic, but they do come up for a reason and can be an indicator of poor sanitation of the toilet. Thus, if this is the case for our reader, then we recommend rectifying this as soon as possible.

Article Name
Reddish-Brown Worm in Woman's Toilet is Likely an Earthworm or Bloodworm
Description
A red/brown worm was spotted in this woman's toilet after her cousin used the bathroom. She states that she has never experienced any worms in her bathroom before, and asks if she should be worried.
Author
Worm Researcher Anton
Comments: 0 Posted by: Worm Researcher Anton Categories: Earthworms, Fishing Worms, Marine Worms