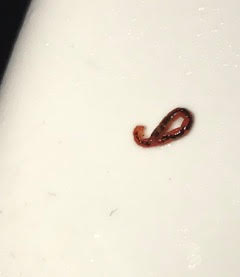 We recently heard from a reader who noticed a small red worm on his shoulder while in the shower. He didn’t think much of the discovery of the worm and simply put it aside, but then he noticed another red worm on his shoulder, and this time it was moving around. He is a little freaked out by the discovery of these worms, especially since he is on a trip in Pakistan and is worried that the worms are super dangerous. This is the first photograph he sent: 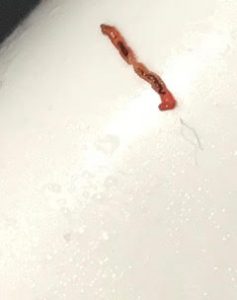 The worm is a reddish color and has a segmented body. Although it appears to be slightly deformed, we believe this worm is an earthworm. Though we haven’t heard from readers discovering earthworms in their showers in Pakistan, discoveries like these happen in the United States and other parts of the world fairly regularly. The second worm he found is a darker red color:

We aren’t sure where these worms came from, but it is possible that they came from the shower head and ended up on our reader’s shoulder. We know our reader is worried these worms are dangerous, but we are quite confident that they will not cause him any harm. That being said, if he is experiencing any odd symptoms or develops a rash on his shoulder, then we encourage him to see a medical professional as soon as possible since we aren’t licensed to give out medical advice!

As we mentioned above, based on the photographs, we think these worms are probably just earthworms. However, we also want to offer another possibility. These red worms could be bloodworms, which, like earthworms, are discovered in bathrooms quite often and are small and red. Bloodworms, which are the larvae of midge flies, feed on sediment and might be living in the grime that has built up in the shower pipes. Like earthworms, bloodworms are also harmless so our reader shouldn’t worry!

To wrap up, a reader discovered two red worms on his shoulder while taking a shower. We believe these worms are earthworms, but they might also be bloodworms, as it can be hard to tell the difference between the two in a photograph alone. Neither bloodworms or earthworms are dangerous, so we don’t think our reader needs to worry about his safety.

Article Name
Red Worms in Pakistan Probably Just Earthworms
Description
A reader discovered two red worms on his shoulder while taking a shower. We believe these worms are earthworms, but they might also be bloodworms, as it can be hard to tell the difference between the two in a photograph alone.
Author
Dori Franklin
Share the knowledge