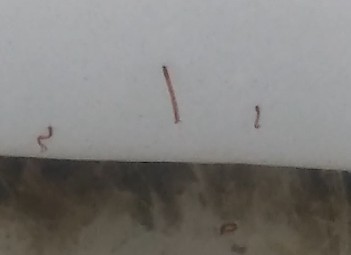 Red worms were found in the toilet bowl belonging to this man, who wishes that we identify them and provide instructions on how to get rid of them. The picture provided does not offer much insight into what these worms look like, other than the fact that they are minuscule in size, and that their bodies are very flexible, and they can bend and curl in many different ways.

However, our reader did kindly supply us with a video which is of much better quality and demonstrates how these worms move about (see screenshot below). It also shows that there are way more worms than displayed in the photograph. Our reader stated that he had tried putting Dettol in his toilet to kill the worms and then flushing the worms. He stated that it worked temporarily, but that after 1-2 days, the worms reappeared nonetheless. 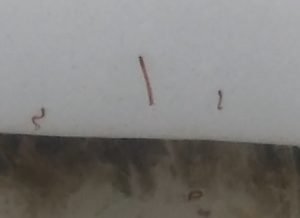 First of all, we want to point out that we will not be recommending the use of any chemical substances, or other methods for that matter of killing off these worms. Secondly, Dettol is simply a disinfectant, it kills bacteria, but it will not kill organisms. Thirdly, these worms are most likely the larvae of midge flies, which are marine worms by nature, and thus would not be affected by flushing the toilet as they can survive underwater.

Otherwise known as bloodworms, midge fly larvae are often used as fishing bait, or as food for domesticated fish. At first, we thought these might be roundworms, an intestinal parasite that is similar in appearance, and that moves in a similar fashion to the worms in the video, but given that our reader stated that the worms ‘appeared’ in his toilet, rather than that they were found in his stool, we went with the assumption that they were bloodworms. On the other hand, if our reader does have cause to believe these worms may be coming from him, then we urge him to consult a medical professional. As we are not medical professionals, this is not an area in which we are qualified to help our readers in, and only a medical professional will be able to provide accurate diagnosis and proper treatment.

Midge fly larvae are harmless worms. They do not bite, nor are they parasitic. That is not to say they could not potentially carry disease, and standard methods of caution should be applied if handling them (ie: wearing some kind of gloves, and not ingesting the worms). If one looks closely enough at a midge fly larva, one can see that its body is segmented and clear, and that the distribution of the red color is uneven. In fact, midge fly larvae are not all red, some can be green, tan or clear, but this type specifically is red because of its production of hemoglobin. It is the production of this oxygen-bearing molecule which enables them to survive underwater without dying. Furthermore, the midge fly larva is an essential part of aquatic food chains, as most fish will eat them for the high content of iron. It is for that reason they are so commonly used as fishing bait and fish feed.

Fishkeeping World states that midge fly larvae can “thrive in polluted water(s).” For this reason, in order to prevent more midge fly larvae from appearing, we encourage our reader to keep cleaning his toilet regularly, if even more regularly than usual for a while just to make sure the larvae will not be tempted to return. Hence, the Dettol will come in handy after all!

To conclude, the worms our reader found in his toilet were midge fly larvae. However, if our reader has cause to believe they are parasites, he should consult a medical professional, and if he is confident that they are something else, or has any more queries, than he can feel free to contact us any time.

Article Name
Red Worms in Man's Toilet are Midge Fly Larvae
Description
Red worms were found in the toilet bowl belonging to this man, who wishes that we identify them and provide instructions on how to get rid of them. The picture provided does not offer much insight into what these worms look like, other than the fact that they are minuscule in size, and that their bodies are very flexible, and they can bend and curl in many different ways.
Author
Worm Researcher Anton
Share the knowledge

This many people searched for this info: 2,129