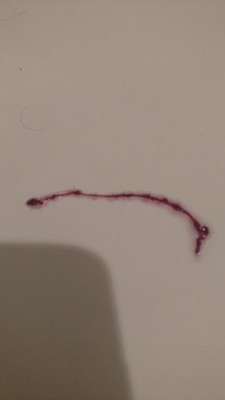 Red Worm in Tub Could be Bloodworm

Earlier this week a reader reached out to us to about something she found in her shower. It might be a worm, it might be something else entirely, she isn’t sure. She discovered one in the tub before she took a shower and another afterwards. She is a little anxious that it came from her. Here is the specimen: 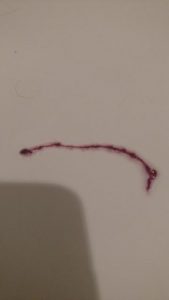 We believe this is a bloodworm, which is another name for a midge fly larva. Bloodworms get their nickname from their striking red color, which is caused by the presence of hemoglobin (a red protein) in the larvae. Bloodworms are detritus (waste) feeders, and tend to live in bodies of water that are polluted by tiny particles of organic matter. Bloodworms need a moist environment to survive, and we have heard from several readers that discovered the larvae in their bathtubs and showers.

The bloodworms our reader found are likely living in the drain of the tub, feeding on the organic matter that builds up there. In order to get rid of these larvae, she needs to thoroughly clean out her drain and bathtub. Using a pipe brush and a cleaning agent designed to get rid of organic debris should successfully eliminate the food source for the bloodworms. Finally, while bloodworms are unsightly, they are not harmful to humans.

We are quite confident that what our reader found in her shower are bloodworms. However, since she mentioned mild fear that it could be a parasite, we want to cover all the bases. If she feels any symptoms or believes that the specimen came from her and not the drain, we encourage her to see a doctor immediately. While we think bloodworms are the correct identification of the mystery critters, we are not medical professionals and cannot weigh in on health matters, or advise on the presence of a parasite.

To conclude, one of our readers found a few red worm-like organisms in her tub. We think they are bloodworms, or midge fly larvae!

Summary
Article Name
Red Worm in Tub Could be Bloodworm
Description
One of our readers found a few red worm-like organisms in her tub. We think they are bloodworms, or midge fly larvae!
Author
Dori Franklin
Comments: 0 Posted by: Worm Researcher Dori Categories: Worms Found in the House