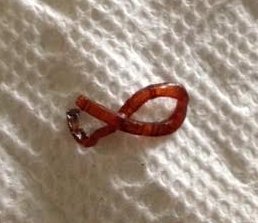 Red Worm in Sweatshirt and Socks

A reader wrote to us recently to ask about a small red worm he found in the pocket of his sweatshirt and in one of his socks. The reader gave no indication why the worms might have been in his clothing, so perhaps he wasn’t sure. Indeed, the reader gave us practically no information at all, although he did send us a photo of the creature. What kind of small red worm might you find in a sweatshirt pocket or in your sock?

First, here is a picture of whatever it is our reader is finding:

There is no real scale in the image, but the creature is obviously fairly small, assuming that the pattern on the napkin or paper towel isn’t abnormally large.

Unfortunately, we have little idea what this creature might be. When we saw the red worm at first, it occurred to us that he might have found a bloodworm, a common name that refers to two different types of red creature, but neither seem especially promising. One type of bloodworm is the larval form of a chironomid, or a non-biting midge. These creatures are quite small, and they can also be a fairly vivid red color, but they have antennae on their heads and tubules on their posterior end, and the creature in the picture above appears to have neither. “Bloodworm” can also refer to the polychaetes that make up the genus Glycera, which are commonly used for fishing. These creatures also look a bit like whatever is in the picture above, but they are found in marine environments, and thus we aren’t sure how they would end up in our reader’s clothing, unless he went fishing recently. (The same problem applies to midge larvae, as they are primarily found in stagnant pools of water.) The only other possibility we can think of is that our reader found an unusual looking earthworm, which are often red. (There are thousands of different species, so they vary in appearance.) The creature above appears to be dried out, and it doesn’t look too much like an earthworm, but a desiccated, dead earthworm does not look like a moist, alive earthworm, so we thought we’d offer it as a final possible.

Overall, though, we aren’t very satisfied with any of the possibilities we have listed, and we think it is unlikely that we have correctly identified what our reader found. If anyone has other suggestions, please feel free to share them in the comments below.

Article Name
Red Worm in Sweatshirt and Socks
Description
A reader wrote to us recently to ask about a small red worm he found in the pocket of his sweatshirt and in one of his socks.
Author
All About Worms
Comments: 0 Posted by: Worm Researcher Evan Categories: Pest Worms