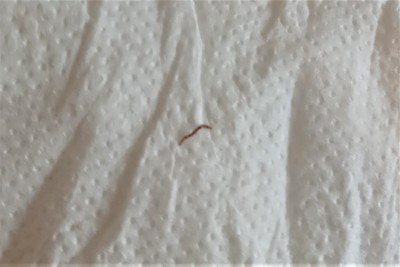 Red-striped Worm in Toilet is a Red Midge Fly Larva

A man from the UK recently sent in this image of a small, thin, red-striped worm found on the rim of his toilet bowl. According to him, the worm is 1cm (0.39-inches) in length and was found after his son had used the toilet. 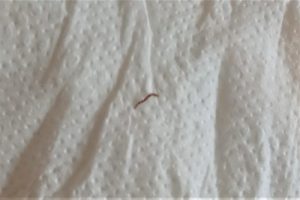 Our reader is concerned that this worm may be parasitic, but rest assure, we have identified this as a species of blood worm, which are not parasitic. ‘Blood worm’, although sounding like a rather grim name, is an umbrella term for a number of species of annelids, meaning they are related to other segmented worms such as earthworms and leeches. This one in particular is a red midge fly larva.

Red midge fly larvae normally feed on the detritus and organic matter at the bottom of stagnant, fresh bodies of water, but can also be found in pipe systems on occasion and coming up people’s toilets. These critters are oligochaetes, meaning they produce erythrocruorin, which is a large protein that carries oxygen, similar to hemoglobin, which humans produce. In simpler terms, red midge fly larvae produce an oxygen-carrying protein that allows them to sustain in low-oxygen conditions! It is also this protein which gives them their red color, just like it is hemoglobin which gives red blood cells their color.

Hence, we think it would have come up from the pipes, rather than from this man’s son’s stomach. This is also supported by the fact that they are not parasitic in nature, so our reader needs not worry about parasitism. This species in particular is otherwise known as the ‘non-biting midge larva.’ However, if at any point our reader has reasonable cause to believe that his son or anyone else may have a parasite, then we encourage him to seek a medical professional and/or parasite specialist to get an accurate diagnosis and proper treatment. As we are not medical professionals, we are not equipped to give medical advice.

Regarding the situation at hand, we recommend that our reader does a deep clean of his toilet to rid his pipes of any other red midge fly larvae. Additionally, making sure that he cleans his toilet regularly (once a week!) will prevent more colonies of these worms from manifesting.

In conclusion, the red-striped worm our reader found in his toilet was a red midge fly larva. These creatures are neither harmful nor parasitic to humans, so our reader needs not fear! Regularly cleaning his toilet should keep these worms at bay.

Article Name
Red-striped Worm in Toilet is a Red Midge Fly Larva
Description
A man from the UK recently sent in this image of a small, thin, red-striped worm found on the rim of his toilet bowl. According to him, the worm is 1cm (0.39-inches) in length and was found after his son had used the toilet.
Author
Worm Researcher Anton
Comments: 0 Posted by: Worm Researcher Anton Categories: Fishing Worms, Marine Worms, Worms Found in the House