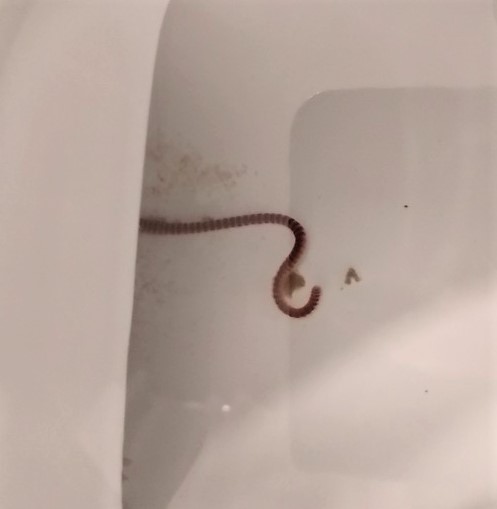 “What kind of worm is this in my toilet?” asks this reader, who sends this photo from Greece. The worm in question appears to be red in color, is striped, and is long but thin. 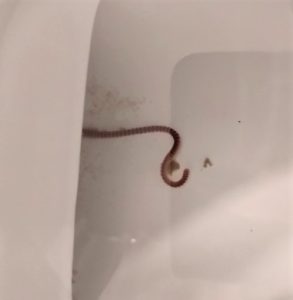 Just from taking a look at this worm, we can tell that this is a redworm. They are commonly known as the red wiggler because of their reaction to being physically handled, which entails frantic squirming and, well, wiggling. They are also referred to as tiger worms because of their distinct stripes.

These worms are a species of earthworms, which one can see in their similar physical characteristics (such as their segmentation and the possession of a clitellum), as well as in their diet, which consists of decomposing organic matter.

Like most species of earthworms, they can occasionally be found in people’s toilets or bathtubs after crawling up through the drain. Usually this is because they will come in through a leak in a pipe somewhere underground where they dwell.

If our reader suspects that she may have a leak, we recommend contacting a professional to look at the problem. The leak could also be in a pipe inside her home, and the worm got into the pipe system via the sewers or by some other method. Signs that our reader may have a leak inside her home include: high moisture levels, warped floorboards, mold, foul-smelling water, discolored water, and/or changes in water pressure.

With all of that said, we are not implying that our reader definitely has a leak and that this is why this worm has appeared; it is merely a possible explanation.

In any case, there is no cause for concern when it comes to the worm itself. All she needs to do is move the worm to another environment and she will be good to go (preferably a moist environment with lots of soil!).

Redworms are entirely harmless; they do not possess venom, they do not bite or sting, and they are not parasitic. If they were, people would not purposefully breed them in their homes for composting purposes!

Vermicomposting has become quite the trendy hobby in the past years, which is the process of breeding worms that eat and break down organic material into nutrient-rich fertilizer for use in the garden.

One of the more popular worms to keep in a vermicomposting bin (the miniaturized ecosystem created for the worms where they live and eat) is the redworm. If our reader wishes to learn more about vermicomposting, he is welcome to check out this past article on vermicomposting.

To conclude, the worm our reader found is a redworm/red wiggler. These little guys are totally harmless, environmentally-beneficial composting worms, so our reader has nothing to worry about. We hope this article assures her of her safety, and we wish her the best!

Article Name
Red-striped Worm Found in Toilet is a Red Wiggler
Description
"What kind of worm is this in my toilet?" asks this reader, who sends this photo from Greece. The worm in question appears to be red in color, is striped, and is long but thin.
Author
Worm Researcher Anton
Share the knowledge

This many people searched for this info: 234