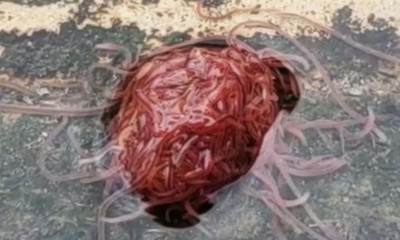 A “red, string-like” worm was found in the bathroom sink of this woman in East Texas. According to our “horrified” reader, the worm was “wiggling out of the overflow”, and she has never seen anything like it before.

Upon discovering the worm, our reader immediately sprayed Clorox on the worm and “down the overflow.” Because of this, she was unable to send us any images of the worm, which does make identifying it difficult. For the future, we encourage our reader to take a picture of any worm discovered before removing it from her home, and we also discourage killing worms too, as they may be completely harmless. Our reader adds that the bathroom was recently built, and thus it is not “old or dirty.”

Despite not having any visual information to go off of, we think this worm was a tubifex worm, otherwise known as tubifex tubifex, tubificid worms, sewage worms, or sludge worms. These common critters are also often referred to as bloodworms, which is a broad term for various annelida (segmented worms such as earthworms, or leeches) that are red in color due to their production of erythrocruorin, a protein that carries oxygen, enabling them to sustain in environments with low levels of oxygen.

Tubificid worms congregate in pipeline systems to feed on the bacteria there, and prefer bodies of stagnant water, such as toilet water, or overflow in a bathroom sink, which explains why our reader found it in the place she did. What is curious about this case is that, typically, tubificids are discovered in groups, usually in a writhing ball of worms, which is not the prettiest of sights (see image below). Of course, it is not impossible to find them alone. In fact, we wrote an article about a lone tubificid worm found this summer, if our reader wishes to read another article on these worms that may contain extra, or different information. 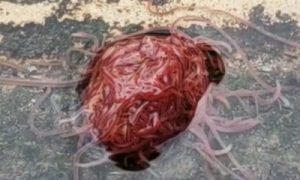 Furthermore, regardless of whether or not the bathroom was newly built, if pipes are not properly cleaned, it will attract creatures such as the tubifex worm. In addition to this, it is possible that the pipes of the new bathroom were perhaps connected to older pipes below the earth, where tubifex worms had already set up camp. Perhaps that is not how piping works, but this is a website about worms after all; we’re not plumbers! Our reader can also rest assure that tubifex worms are completely harmless to humans. Moving the worms found to a puddle or pond outside would be a preferable alternative to killing them, and if our reader is consistent with cleaning her pipes, then this should suffice in keeping tubificid worms from nesting in her pipes.

To conclude, the red, string-like worm our reader found in the overflow from her bathroom sink was a tubificid worm. Following the advice above should be enough to rid her bathroom of this nuisance, and she will have nothing to worry about.

Article Name
Red, String-Like Worm in Bathroom Sink is a Tubificid Worm (Tubifex Tubifex)
Description
A "red, string-like" worm was found in the bathroom sink of this woman in East Texas. According to our "horrified" reader, the worm was "wiggling out of the overflow", and she has never seen anything like it before.
Author
Worm Researcher Anton
Share the knowledge

This many people searched for this info: 2,357