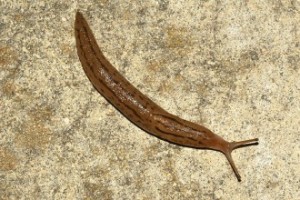 We received a fairly puzzling question a little while ago from a reader about what he believed to be a red worm. Much was made of the red worm’s “antennae,” which are evidently retractable if we are understanding the reader’s description properly. If the worm did have retractable antennae, the “antennae” are probably tentacles and the “worm” is likely a slug. Below we explain the “red slug in the bathroom” hypothesis in more detail, exploring it with reference to the reader’s precise circumstances.

Unfortunately, the reader submitted no picture along with his question, and the message he sent was very difficult to understand. It appears to have been written by someone whose first language is not English, and as avid language learners ourselves, we are very sympathetic to the difficulties of describing an unknown creature in a foreign tongue. The message is hard to paraphrase, so here is the entire thing in its original form (although we capitalized a few words and deleted an apostrophe):

“A Google search that I did lead me to this page. I sometimes find a red worm that debates a lot when I pour soapy water in it and whose head behave like a snail antenna when it is buried (like, when it is in some hole and only its head is outside. And I make any movement nearby it pulls it back like a snail antenna). Wouldn’t that be it?”

The page he refers to is an article we wrote about red worms on the bathroom floor, and this gives the reader’s question (“Wouldn’t that be it?”) some crucial context. We presume he is asking us if he found a millipede, which is the tentative identification we offered in the previous article, but, as indicated above, we think it is more likely he found a slug. He refers specifically to a “snail antenna” that appears to be retractable, and this is consistent with his having found a slug, although again the antennae are actually tentacles. (With light-sensitive tips, these tentacles are basically slug eyes, with “eyes” being understood in a fairly primitive sense.) Slugs are simply snails without shells, so he might have been closer to the truth than he realized when he referred to the “snail antenna.”

Might he have actually then just found a snail? We think this is unlikely because no mention was made of a shell, and that is essentially the defining characteristic of a snail. When you find a snail, you are likely to note its shell. This same reasoning can be applied to the legs of millipedes, which is why we don’t think our reader found a millipede. The legs are generally the first feature noted about a millipede, and since there is no mention of legs, he probably didn’t find a millipede. (Millipedes do, for the record, have antennae, but not tentacles that retract.)

If our reader did find a slug, it will look something like this:

This is simply an image we have in our files, not the creature that our reader found (because, again, the reader submitted no picture). We include it so that our reader can check this image against whatever he found. If the creature he found in his bathroom looks like this, then he found a slug.

So, we think our reader most likely found a slug, although we aren’t terribly confident about this because of the ambiguity of our reader’s phrasing. We aren’t entirely sure if we understood the “snail antenna” part correctly, for instance, and this is a crucial fact for our identification. Moreover, we don’t have a picture to work with, and that of course makes identification even more difficult. So, a slug seems like the most likely possibility, but sometimes you still can’t be very confident in the most likely possibility.

Article Name
AAW - Red Slug in Bathroom
Description
We received a fairly puzzling question a little while ago from a reader about what he believed to be a red worm.
Author
All About Worms
Share the knowledge

1 thought on “Red Slug in Bathroom”