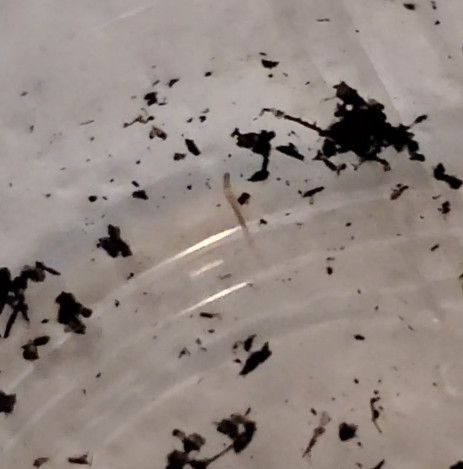 “I would love to know what these are and if they are harmful to my other specimens”, states this reader in her submission regarding the semi-transparent, yellow, worm-like creature with a red head pictured below. It is a bit difficult to spot among all the dark objects in the photo, but in the center you can see the clear worm-like critter making its way between these objects. Our reader was also so kind as to send us a “video of the creature moving about the enclosure“. “I’ve been searching for a while but I can’t find a bug that is matching mine. I posted a video on reddit […] but I am not sure of the answers because I feel they don’t match my description.”

She goes on to list a series of observations she has made of the creature, which we really appreciate, as any context is always helpful. Her observations are as follows: “This was found in a semi-moist substrate in an enclosure containing ivory millipedes and springtails. The specimen in the video above is damaged – the backside was torn when I was trying to capture it. They’re too small to see what the backside looks like exactly, but it’s not sharp/tapered. It appears to only have legs on the front (barely visible), not throughout the body. It appears to have two very small and thin antennae, but they are not long like centipedes. It has a red head and a clear-ish, yellow body. They are barely less than a millimeter thick, and about half a centimeter long. They appear to have segmented bodies. They are fast moving and burrow through substrate quickly when I shine a light on them. When captured or bothered, they flail, but they do not curl up.” 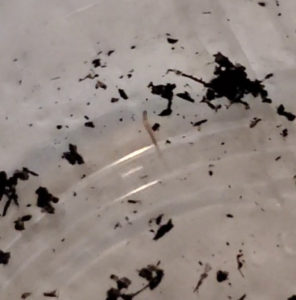 Alternatively, this could be a tube of shed skin that is still attached to the larva that it is dragging around. In any case, we think it is an insect larva of some kind, and given its immaturity and small size, we do not think it poses any threat to the other specimens in the enclosure, nor to our reader herself. We think if she scoops up the larva on to a dustpan and moves it outside, she will have solved the issue. This larva likely ended up here accidentally. If it is indeed a casemaking clothes moth caterpillar, they tend to climb walls and ceilings, so perhaps it fell into the enclosure by some chance. In any case, we recommend that our reader search her home for more of these, as its presence may be indicative of more larvae in the home. She should check her clothing, towels, bed sheets and other organic-based textiles, especially those that are stored in dark, cramped spaces. If she finds more and thinks she may be experiencing an infestation, she can consult “this article on clothes moth larvae” we published a while ago.

In conclusion, we think that the worm-like critter our reader found in her millipede and springtail enclosure is a casemaking clothes moth caterpillar, though it could be a different larva dragging around its shed skin. Either way, we do not think it will pose a threat to the other organisms, given that it is clearly an insect larva of quite a generic appearance, meaning it’s likely a moth caterpillar or a beetle larva, which usually cannot do much harm until they are adults. We hope this article helps and we wish our reader the very best!

Article Name
Red-headed, Translucent Worm Found in Bug Enclosure is a Casemaking Clothes Moth Caterpillar
Description
"I would love to know what these are and if they are harmful to my other specimens", states this reader in her submission regarding the semi-transparent, yellow, worm-like creature with a red head pictured below. It is a bit difficult to spot among all the dark objects in the photo, but in the center you can see the clear worm-like critter making its way between these objects."
Author
Worm Researcher Anton
Share the knowledge

This many people searched for this info: 141