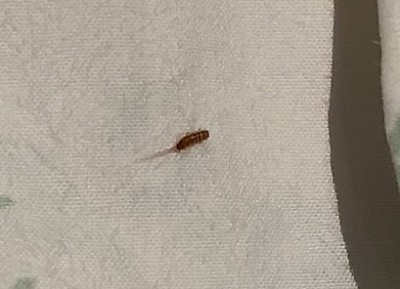 Red & Brown Bug on Comforter is a Carpet Beetle Larva

This reader wonders if the creature she found wandering on her white comforter is a carpet beetle larva. The creature in question appears to be a brownish-red color, with stripes and a long tail that spans the length of its body. 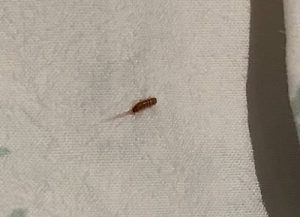 In addition to providing a video of excellent quality, from which the screenshot above was taken, our reader adds that the creature was not “even the size of a sesame seed” and that she was freaked out by her discovery. And thanks to our reader’s enlargement of the video’s picture, we can confirm our reader’s identification of the creature as a carpet beetle larva.

Carpet beetle larvae come in various forms, from the bristly tan and brown-striped carpet beetle larva, to the long-tailed black carpet beetle larva. And then some appear to be more reddish-brown like this one our reader discovered. Although these creatures are completely harmless toward creatures of any species, they can be quite the nuisance when discovered in the home, and are considered pests. This is because the food source of the carpet beetle larva is, first and foremost, textiles. Usually this is limited to animal-based fabrics, but we would not put it past a carpet beetle larva to chew on mixed fabrics as well. It should be noted that it is during their larval stage that carpet beetles do the most damage, and thus dealing with the — potential — infestation promptly is important to preventing significant damage to one’s property.

So, what kinds of items might carpet beetles infest? Obviously it is their infestation of carpets that gave them their names (oftentimes one can find them underneath or between the fibers of carpets), but they commonly roam on clothing, upholstered furniture and beds, such as in the case of our reader. They have even been reported to munch on books. Then the question follows of how to control the infestation once it is discovered.

One will first want to locate their source, which is usually made obvious by a heavy concentration in roaming larvae. As our reader only reports finding one, perhaps her bed is not the source of the infestation, or perhaps there is not an infestation to begin with, but one should check for an infestation nonetheless so as not to have one ongoing right under one’s nose (which is not uncommon). Vacuuming any areas that carpet beetle larvae may reside will remove any larvae or eggs that are there, these areas including, but not being limited to carpets, underneath furniture (especially upholstery) and other dark, cramped spaces in the home where a bug might be hidden from sight. Then, one should launder all potentially infested, animal-based materials in the hottest temperature they can muster. If one is dealing with textiles that cannot be laundered, then steam-cleaning is also a good option.

In order to prevent future infestations, one should ensure that the cracks in the flooring and walling of one’s home are sealed where possible, and that window screens are in optimal condition (carpet beetles can fly!). Consistent house keeping and vacuuming can also help prevent infestations of various kinds of bugs before they happen. Furthermore, it might be a good idea to securely store any unused garments so as not attract carpet beetle larvae, as often-used materials tend to not be infested. Vacuum-sealed bags or cold vaults are both viable options for this.

To conclude, the creature our reader found on her comforter was indeed a carpet beetle larva. As we have dealt with these plenty of times, we can confidently provide our reader with this identification, as well as the information above which we hope can help her rid her home of this invasion.

Article Name
Red & Brown Bug on Comforter is a Carpet Beetle Larva
Description
This reader wonders if the creature she found wandering on her white comforter is a carpet beetle larva. The creature in question appears to be a brownish-red color, with stripes and a long tail that spans the length of its body.
Author
Worm Researcher Anton
Comments: 0 Posted by: All About Worms Categories: Carpet Beetle Larvae, Pest Worms, Worms Found in the House