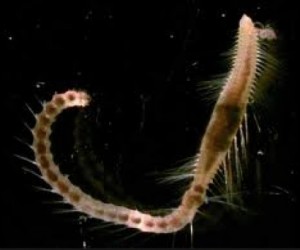 A reader wrote us a series of questions a while ago about rearing marine worms. He is wondering first of all if it is possible to rear marine worms (yes), and then he asked several highly specific questions that are very difficult to answer. Consistent with our policy of answering essentially every question we receive, however, we will venture to address our reader’s interest in rearing marine worms as best as we can.

There are several things that make our reader’s questions hard to answer. First, he asked about a specific worm – “paranereis Acrata.” We thought this was a specific species for which the reader had supplied the Latin name, but it turns out this is Spanish. We are unsure what “Acrata” means, and “paranereis” is either the Spanish rendering of the Latin word “Perinereis,” or else is simply a misspelling of “Perinereis.” The Perinereis genus is composed of 56 species of polychaetes, which, being polychaetes (i.e., members of the class Polychaeta), are annelid worms. The reader asked if these worms can be imported from China, and if they can be “preserved.” He also asked if they are feasible to breed in captivity. Unfortunately, these questions are so highly specific that we have no way to reasonably address them. We know a lot about worms, but we have our limitations. We hope you’ll forgive our ignorance of the role of “paranereis Acrata,” whatever exact species this is, in the Chinese marine worm market.

We can talk in more general terms about buying and rearing marine worms, however. There are tens of thousands of species of marine worms, and obviously not all of them can be bought and reared. Probably the most common worm that is bought and reared by aquarists are whiteworms (Enchytraeus buchholzi), which can serve as fish food. Since they serve as fish food, they are sometimes taken for marine worms, even though they actually aren’t. (They are raised in a specific type of soil with lots of organic matter, which serves as food for the whiteworms.) Since these aren’t marine worms, this doesn’t really answer our reader’s basic question, but we thought we would mention it in case he is interested in rearing worms for fish food. (The reader cites no particular reason for his interest in rearing marine worms.)

We should also mention that some marine worms are actually reared unwittingly. People who own and maintain an aquarium very likely sustain a population of planaria worms, which are very small, white flatworms that are present in a variety of marine environments. They don’t harm the fish in an aquarium, so most people simply let them be. You can also purchase a range of marine worms, and a good place to start is at an aquarium supply store, where you may be able to buy aquatic worms. You can also purchase some marine worms online, but it’s probably a good idea to visit a store anyway. If nothing else, you can see what’s available and get some information about your target marine worm – like tips about how to rear them – by talking to the sales staff. In general, you’ll have to do what all people who rear an animal do: provide a suitable living environment, supply food, enabling conditions for mating, and so on.

Unfortunately, we are unable to answer our reader’s specific questions about paranereis Acrata and the Chinese marine worm market. If we had to guess, we’d say yes, it probably is possible to order worms from China – where there’s a will there is a way – but this might be tricky, logistically (and maybe legally) speaking. And if you are successful in obtaining worms from the Chinese market, we see no reason why you wouldn’t be able to rear them. As for our reader’s more general concern, yes, you can buy and rear marine worms, and if he owns an aquarium, he might be rearing some right now.

Article Name
Rearing Marine Worms
Description
Yes, you can buy and rear marine worms, and if he owns an aquarium, he might be rearing some right now.
Author
All About Worms
Share the knowledge