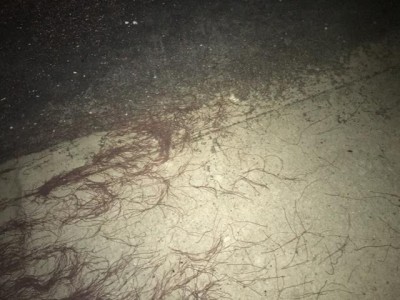 One of our readers wrote to us after experiencing Hurricane Hermine, which occurred in Florida earlier this week. She said that after the hurricane happened, she found a bunch of worms in the bottom of her pool. She was curious about how they got there, but didn’t put too much thought into it. She vacuumed them up and continued with her day.

The next night, it was still raining heavily. The ground was totally saturated, and small rivers had begun to form around her house. At the bottom of the driveway it looked as though there was seaweed floating, but it was actually thousands of long, red worms: 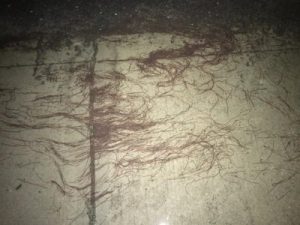 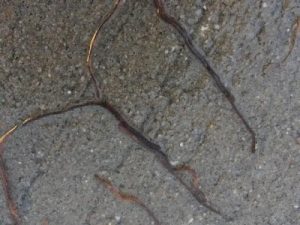 She thinks these might be horsehair worms. We can see why horsehair worms would be her first guess. They are parasitic to arthropod insects and eject themselves from their hosts when they sense they are near water. However, after examining the photos, we want to throw a few other options out there. We think it is more likely that what she discovered are bloodworms or earthworms.

Bloodworms, also known as midge fly larvae, are long and red and need a moist environment to survive. In the past, a reader found bloodworms by the thousands on their patio after discovering a leak in their ceiling. Bloodworms are not directly harmful to humans or pets, but they can potentially carry diseases. We think the worms our reader found could be bloodworms because of their appearance and the environment they were found in.

After examining the zoomed-in photo, we learn towards identifying these as earthworms based on their purple-brown color and segmented bodies. Many readers have also found hundreds of earthworms after heavy rains, which makes this an even more likely answer. Earthworms aren’t harmful to humans or pets, and play an important role in the ecosystem as decomposers!

To summarize, one of our readers found thousands of worms swimming in her driveway after Hurricane Hermine. We believe these worms are probably earthworms!