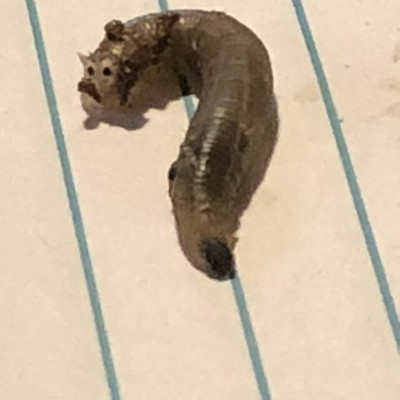 A reader recently reached out to us about an organism she found while rearranging the rocks in her garden. At first glance she thought the specimen was an earthworm, but after looking more closely at it she thinks it could be a caterpillar or larva. In addition to the photographs she included, she also told us that the specimen is about 3/4 of an inch long. 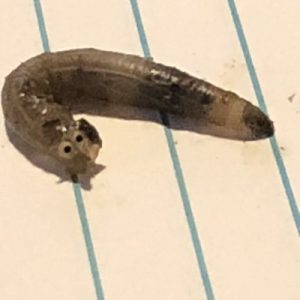 The creature has a smooth gray body. We don’t see any legs, but its head and tail end do look very different from each other. One is a distinct darker area and the other end almost looks like a face! We agree with our reader that this is some sort of caterpillar or larva. We are confident that our reader has discovered a crane fly larva! 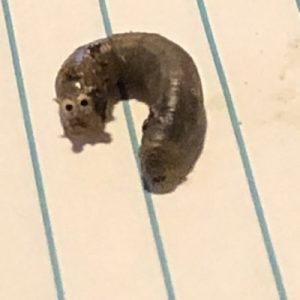 The many different species of crane flies means that there are also various lifestyles for crane flies and their larvae. While most crane flies are aquatic organisms that live in lakes and streams, some prefer moist soil. Aquatic crane flies typically feed on decaying vegetation and leaf debris, but other species choose to fill up on insects such as mosquito larvae. Terrestrial larvae mostly eat roots, and most adult crane flies don’t eat much if anything (those that do drink flower nectar!) since they spend their short lives mating and laying eggs.

Since our reader discovered this organism under a rock in her garden, we think it is most likely a terrestrial crane fly larva. Terrestrial crane fly larvae are sometimes considered to be pests because they eat roots, but based on the tone and content our reader’s message, we don’t think she is annoyed or anxious to eliminate them from her garden. They also aren’t considered to be dangerous or harmful!

In conclusion, a reader reached out to us about a gray worm-like organism she noticed in her garden. We are confident that she has discovered a crane fly larva. 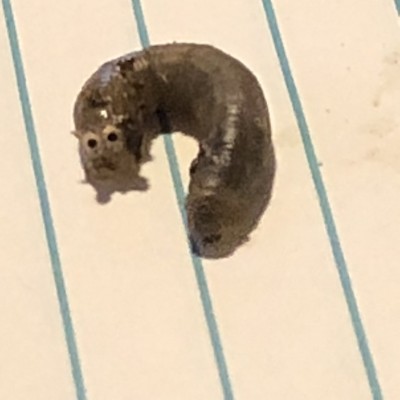 Article Name
Reader Finds Crane Fly Larva in Garden
Description
A reader reached out to us about a gray worm-like organism she noticed in her garden. We are confident that she has discovered a crane fly larva.
Author
Dori Franklin
Comments: 0 Posted by: Worm Researcher Dori Categories: Garden Worms