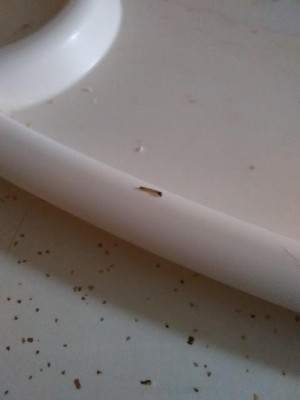 Worms in Reader’s Kitchen are Larvae

We recently heard from a reader who found a few worm-like organisms in her house. She discovered 1 in her room and 4 in her kitchen. She would like to know what kind of creature they are and how she can get rid of them. This is the photograph she included: 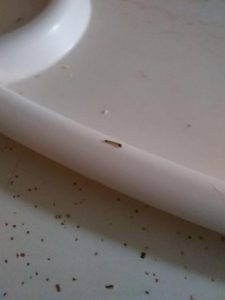 She explained that the organism featured in the photograph is the smallest of the ones she found, and that the others have been larger. The specimen has a thin, light brown body, and a round black head. We don’t think it has legs, but we suppose the legs might just be extremley tiny.

We think that our reader has found moth fly larvae (a.k.a. drain fly larvae.) Moth fly larvae are tiny larvae that are commonly discovered in readers’ homes. While they are usually found near a drain, they do occasionally pop up in other locations. To get rid of these moth fly larvae, our reader will need to clean her kitchen drain thoroughly. These larvae feed on the grime that builds up in a drain, so cleaning the drain effectively will eliminate the food source for these specimens.

While we are fairly confident that this creature is moth fly larvae, we also want to mention its remarkable resemblance to the Dark Flat caterpillar (Tapena thwaitesi bornea larvae.) When they first hatch from the egg, these caterpillars have thin yellow bodies and a dark heart-shaped head, appearing exactly like the specimen in the picture our reader sent. However, these caterpillars are found in Sri Lanka and Thailand. We don’t know where our reader is writing from, so we suppose it is possible that the species she discovered is actually the Dark Flat caterpillar, and not moth fly larva.

To wrap up, a reader found a few small larvae in her house. We think she probably discovered moth fly larvae. However, we believe there is also a possibility that the creature is a caterpillar that closely resembles Tapena thwaitesi bornea larvae.