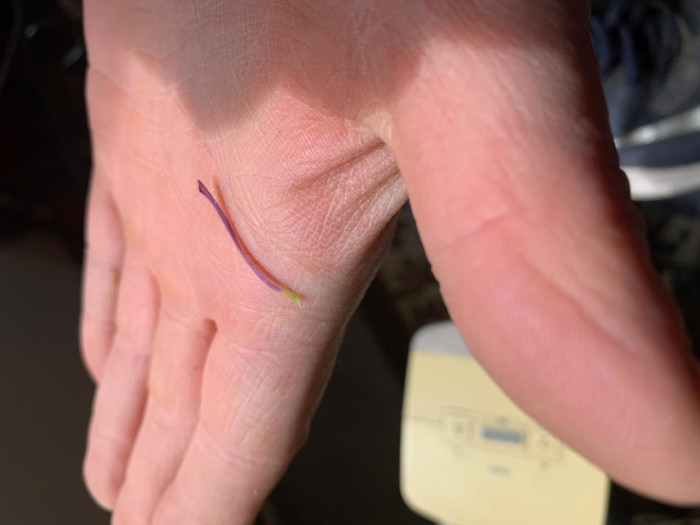 “I put my finger under this piece of lettuce when I realized it might not be a piece of lettuce at all, but a worm”, states this reader in his submission regarding the long, purple object pictured below. “As I looked more closely, I think I saw feelers protrude out from the green end and some pincers under the skin at the opposite end; maybe.” Our reader’s story starts with him “pulling out some lettuce from a bag purchased from a local grocery store.” He goes on to say: “I noticed what looked like a new lettuce leaf shoot (unopened, newly sprouted shoot of lettuce, maybe). But it was different, and was hanging half off the counter top and half in the air. Something made me stop and take notice.”

“In any case I had a distinct feeling that my finger was ever so slightly numb, which I immediately attributed to this ‘worm’. I was further intrigued and carefully switched the thing to the palm of my other hand and while showing it to someone else in the kitchen, noticed that the area around the palm of my hand was now feeling ever so slightly numb. I set this little creature on a decorative plate in the living room and, while it didn’t seem to be moving – and still not entirely sure the thing was a worm or alive at all – I left it to carry on with what I was doing. It’s still here, though quite clearly no longer living; if it ever was living to begin with. Please don’t think me any crazier than I think of myself for submitting this; after finding your site from a Google search.”

To begin with, we want to say we are happy that our reader chose us to consult over this matter, and also that the images he sent us were really fantastic: super clear and well-lit. Now, when it comes to the organism in the picture, we have not seen anything like it before. In the subject of his submission, our reader suggested it could be a phasmid. Phasmids, better known as stick insects, are insects whose bodies mimic the colors and shapes of sticks and/or leaves. They have long, thin bodies, and, depending on the species, their legs look like long ‘stick’-like appendages. There are also species that have more complicated shapes, such as those who have leaf-shaped appendages. We do not think this is a phasmid, for a few reasons: 1) This creature does not seem to possess legs. 2) It is purple. We have not seen any purple phasmids before, and they are not able to change color or shape at will. 3) Our reader states this creature has “pincers” and “feelers”, which phasmids do not.

In all honesty, we think this is probably just a piece from the lettuce, or perhaps a stem from some other plant on the farm from which the lettuce came. The “pincers” and “feelers” could just have been new roots that started growing from the plant if it had been sitting in the bag for a while, much like raw potatoes will grow new roots if left for a while. Besides, even though it is possible to find dead bugs in one’s lettuce, the fact that this creature never moved at all, in conjunction with its lack of insect-like features, points to that this is likely not a worm or organism of any kind.

To conclude, we think that the purple object our reader found in his lettuce is just a stem or some other kind of plant material. We could be wrong, but it does not resemble a worm or insect in the least. Our reader’s “numb” feelings could just be an allergic reaction (if the object came from a different vegetable, for example), or it could have been a placebo effect since our reader was convinced it was a worm. We hope this helps and we wish him the very best!

Article Name
Purple Worm-like Creature Found in Lettuce is Probably Just a Stem
Description
"I put my finger under this piece of lettuce when I realized it might not be a piece of lettuce at all, but a worm", states this reader in his submission regarding the long, purple object pictured below. "As I looked more closely, I think I saw feelers protrude out from the green end and some pincers under the skin at the opposite end; maybe."
Author
Worm Researcher Anton
Share the knowledge

People helped by this info: 407