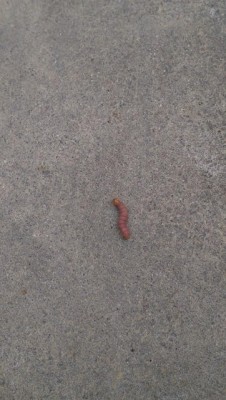 A reader in Tucson, Arizona asks “what bug is this?” after finding a few interesting creatures outside his door. The creatures in question appear to be a worm-like creature of sorts that is a “pinkish color”, “as well as a yellow and yellowish brown color”, according to our reader. 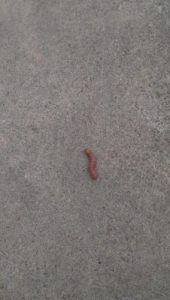 Further to the photograph and the physical descriptions of the caterpillar, our reader stated that he found a few of these creatures inside his apartment last year, but that they have returned this year and “always seem to come around this time of year.” The exterminator that his apartment complex uses says that “they are a palm tree budworm” since he has a palm tree a few feet from his door. He has seen these worm-like critters inside and outside his apartment, and “they don’t seem to get much bigger than the one in the picture” he provided.

As such, the caterpillars most densely populate the desert states of Arizona and California, where they thrive in the hot climate and dry air. The larvae can tend to stray from their habitat and source of food during the early stages of their ‘larval-hood’ (if we can call it that), and will thus sometimes wander in to someone’s home. What is more common is that the caterpillars are actually buffeted off the tree by strong winds and are carried into the home. However, in our reader’s case, we would assume that either of the two explanations are equally possible, seeing as the palm tree is a mere few feet from our reader’s apartment door. Thereafter, toward the end of their larval stage, the caterpillars will naturally circle back to the base of a palm tree, where they will start building their cocoon in preparation for pupation (the stage during which the caterpillar encases itself in a self-made chrysalis in which it can undergo metamorphosis and transform into a moth).

What is important to know is that when the palm flower caterpillars are inside one’s home, they pose no threat to human or animal health and are not to be a cause for concern. The most they will do is chew through a carpet a bit to make room for their cocoon if they cannot make it back to the palm tree in time, giving them the nickname ‘carpet caterpillar’ (not to be confused with the carpet beetle larva, which can wreak significant damage on one’s carpets). Of course, if the caterpillars fully mature and lay more eggs inside the home, infestations can occur. So to prevent that, moving the caterpillars back outside to the palm tree should suffice in controlling and preventing the infestation. Our reader should be warned though, that while the caterpillar is not venomous, they do pack a powerful bite if threatened. For that reason, we recommend wearing protective gear if picking them up with one’s hands (gardening gloves, for example), while still being careful so as not to harm them. Otherwise, using a dustpan or something of the like will also do the job. Lastly, we always recommend to our readers that they should ensure that there are no cracks in window screens or in the house in general where insects and larvae could possibly get through, as this prevents infestations of all kinds of creatures.

To conclude, the creatures our reader has been finding inside and outside his apartment in Tucson are palm flower caterpillars. They are not dangerous, save for their bite, and should be fairly easy to deal with. If our reader has more questions about worms or any other not-so creepy crawlers, he is free to send them our way. Likewise, if any of our other readers have any queries or comments, they are welcome to leave them in the comments section below!

Article Name
Pinkish "Bugs" Found Around Arizona Apartment are Palm Flower Caterpillars
Description
A reader in Tucson, Arizona asks "what bug is this?" after finding a few interesting creatures outside his door. The creatures in question appear to be a worm-like creature of sorts that is a "pinkish color", "as well as a yellow and yellowish brown color", according to our reader.
Author
Worm Researcher Anton
Share the knowledge

This many people searched for this info: 1,148