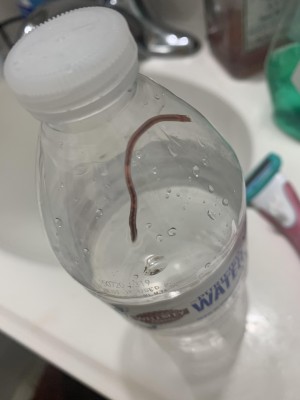 “There have been three occasions that when my husband showers, I find these worms in the shower and don’t know if they are parasites,” a reader writes in her query. One of these worms is pictured below, and appears to be pink in color, with semi-transparent skin revealing a long dark strand of entrails running the length of its thin, long body. 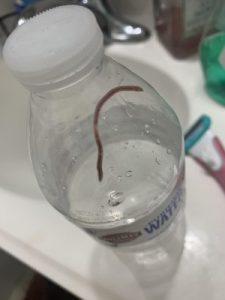 This lone sentence was the extent of the context our reader provided, but we appreciate it nonetheless. We also want to thank her for the excellent photograph she sent in, as this is very helpful to us when trying to identify the worm.

Despite these helpful contributions on the part of our reader, we have found it challenging finding a match for this worm. It does resemble the common earthworm with its pink, elongated body, but it does lack the clitellum (the thicker band of skin encircling an earthworm’s midsection), which is characteristic of the earthworm. If it were not for the lack of a clitellum, we probably would suggest that these worms are earthworms, as it is not uncommon for earthworms to crawl up through people’s drains. On the other hand, the number of worms, though unspecified, is at odds with what we know about earthworms showing up in people’s bathrooms. That being said, this worm in particular could be an juvenile earthworm. The clitellum functions to secrete a substance where the worm’s eggs are deposited, and is thus an important part of sexual reproduction. For that reason, the clitellum is not visible in earthworms that are not sexually mature. If our reader could let us know in the comments section below whether she noticed clitellums on any of the other worms we would much appreciate that. Bearing that in mind, we think it is still worth considering alternative identities.

So, what other worms are there that are pink, can be translucent, and are potentially marine worms? Well, we can rule out any species of bristle worm, because although there are plenty of pink species of bristle worms, the worm in this photograph is clearly without bristles. Perhaps this is a bloodworm? Bloodworms are any species of marine worm that produces enough hemoglobin (or a similar oxygen-carrying protein) to turn them red. Out of all the species of bloodworms, the only one this one somewhat resembles is a glycera bloodworm, which is also long and pink in color. The problem here is that glycera bloodworms also have bristles, which is a feature we already ruled out for this worm. Although we think it unlikely, we would be remiss if we didn’t at least mention the possibility that this is a roundworm, which is a parasitic nematode. If our reader’s husband starts experiencing symptoms of some sort, and she has reasonable cause to believe it is linked to the worms found in the shower, we urge her to seek medical help for her husband.

Going to see his doctor might be our reader’s husband’s first instinct, but the truth of the matter is that most doctors do not receive training in parasitology. For that reason, we tend to recommend that our readers instead seek out specialists in that particular field. There are various ways our reader can go about finding such a specialist, and they are as follows: 1) Search for a medical parasitologist in their area using this directory of medical parasitology consultants: https://www.astmh.org/for-astmh-members/clinical-consultants-directory. 2) Search for a local parasitologist by doing a Google search for “medical parasitologist (name of the closest big city)” or “tropical medicine specialist (name of the closest big city)”. 3) Get in touch with Dr. Omar Amin at the Parasitology Center at https://www.parasitetesting. 4) Contact Dr. Vipul Savaliya of Infectious Disease Care (“IDCare”) at idcarepa.com.

Additionally, what we can recommend that our reader do is move all roaming worms outside, preferably to a damp environment, as that seems to be the type of climate they prefer. When doing this, we advise taking precautionary measures, such as wearing garden gloves and avoiding any direct contact with the worms. We do not know if they are potentially parasites, and either way, one can have unpredictable allergic reactions when coming into contact with strange worms. Our reader should then do a deep clean of her shower and bathroom, as well as make sure that she and her husband stick to a consistent cleaning regime. This will help prevent the current infestation of worms, as well as prevent any future ones. If possible, our reader can also bring the worm in the water bottle to her local county extension office for a second opinion on its identification.

To conclude, we cannot say for certain what these worms are, though our best guess is that they are earthworms, and that the one in the photo is sexually immature. Of course, if our reader has cause to believe these worms are indeed parasites, then we urge her and her husband to seek medical help. Now, if any of our other readers have any ideas as to the identity of these worms, they are welcome to share their suggestions in the comments section. We hope that this article proves helpful to our reader and that her shower and home are worm-free soon!

Article Name
Pink Worms With Dark Entrails in Shower Could Be Sexually Immature Earthworms
Description
"There have been three occasions that when my husband showers, I find these worms in the shower and don't know if they are parasites," a reader writes in her query. One of these worms is pictured below, and appears to be pink in color, with semi-transparent skin revealing a long dark strand of entrails running the length of its thin, long body.
Author
Worm Researcher Anton
Comments: 0 Posted by: All About Worms Categories: Earthworms, Garden Worms, Segmented Worms Annelida