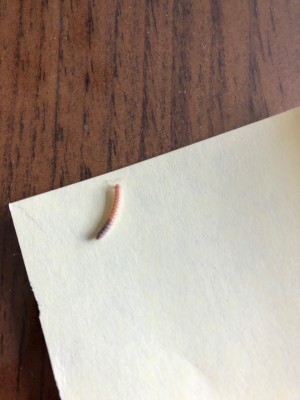 Pink worms with brown tails were recently discovered in this reader’s palm plants which she bought from IKEA. Our reader wishes to know what these worms are and if we can help her figure out what to do about them. 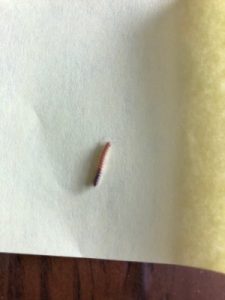 Our reader starts her query by stating that when scouring the internet for answers, she had come across an an old article of ours in which we had answered a similar query, but did not give a concrete identification due to the photographs sent in at the time being too blurry. This reader states that her “insect” looks the same, but the photos she has sent in are far more focused and clear. She wishes to know if the photos she has sent will help in identifying the bugs. In addition to this, she says that she has never found worms like these until she brought home this palm plant from IKEA.

Firstly, we want to confirm that the photos definitely do help. Not only are they close up and clear enough for us to get a grasp of the creature’s physical characteristics, but by placing them on a piece of paper — where the edge is visible — we get an idea of its size too. Secondly, we can neither confirm nor deny if this is the same bug from the article in 2014, as the photograph in the old article is much too blurry to be able to tell for sure. What we can say is that our reader has most likely found a millipede in her palm plant. 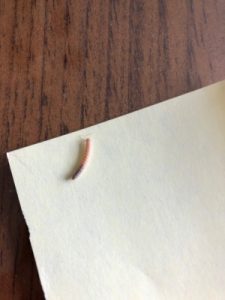 At first we thought it might be a centipede. If one zooms in close enough on the photograph, one can make out two little antennae sprouting from its head. What one can’t see is whether or not its legs sprout from its sides or from the bottom of its body (which is the fundamental difference between a millipede and a centipede), or even if it has legs at all! That being said, some species of millipedes do have antennae as well, and its segmented, small body, uniform shape and location of discovery all point to this being a millipede. Millipedes, in actual fact, are not insects, but arthropods. What makes these invertebrates arthropods is their hard exoskeleton (which make them tougher to chew for predators), their segmented bodies, and their paired legs (which sprout from said segments).

We cannot say specifically which species of millipede this is for sure, as its gradient of color, from its pink head to its brown tail, suggests that it is underdeveloped. From what we know, and have seen, millipedes tend to be one uniform color when mature, ranging from pale yellows to pitch blacks, and so we would assume this is indeed a ‘baby millipede’. What we can say about it is that millipedes, though environmentally beneficial in the garden (due to the fact that they break down decomposing organic matter and turn it into nutrient-rich fertilizer), are not welcome in houseplants. This is because after they run out of plant litter and mulch to feed on, they might head down to the base of the plant to start eating the roots, where they can do real damage to the houseplant.

To get rid of the millipedes in her palm plant, we recommend that our reader removes all leaf litter, mulch and other organic matter that does not need to be in the plant, as this will prevent the attraction of more millipedes and will discourage the existing millipedes from staying. Then, she should remove all visible millipedes. Finding them may include sifting through the soil (a small rake may be in order), lifting the plant from its pot, and even lifting the pot from its base (if it has one), as millipedes tend to hide there. Then, she should let the top layer of her plant’s soil dry out more between watering it, as millipedes prefer moist environments, and a dry one would force them out of the plant in search of a new habitat. As she repeats the process of letting the soil dry before watering it each time, our reader should check under and in her pot for more millipedes and manually remove them. Any millipedes found can be placed outside, in a garden or forest, where their composting role is more needed and welcome. A lot of sources will recommend using an insecticide spray instead, but not only do we not condone killing millipedes, but insecticides tend to have little effect on millipedes, and it would be a waste of money to purchase one.

In conclusion, the creatures our reader found in her palm plant are millipedes. We hope that this article helped her find out what this creature is and how to deal with it, and that her palm plant is rid of any and all pests soon! If any of our other readers have any clues as to what species of millipede this is specifically, they should feel free to comment their suggestions below.

Article Name
Pink Worms with Brown Tails in Palm Plant are Millipedes
Description
Pink worms with brown tails were recently discovered in this reader's palm plants which she bought from IKEA. Our reader wishes to know what these worms are and if we can help her figure out what to do about them.
Author
Worm Researcher Anton
Share the knowledge

This many people searched for this info: 931